Share All sharing options for: Eater Inside (outside LA): Rao's Las Vegas

Outside Rao's Las Vegas, inside Caesars

We usually reserve our Inside reports for local spots, but since Eater LA is in Vegas, and Vegas is practically our back yard (just ask Paris Hilton), we wanted to give an inside look to a new establishment on the Strip. We'll be Inside LA again tomorrow.

Touted as the hardest reservation to get in New York, the venerable 10-table Harlem Italian restaurant Rao's opened a large-scale version at Caesars Palace a few days ago. Naturally, since we know we'll never be cool enough to be "invited" to eat at the original, we decided to check it out. A few things we learned: (1) The best way to get a seat at the original Rao's, if ever: "Go in, get a cocktail, get to know us. Maybe you'll have luck." (2) The best way to get a seat at Rao's Las Vegas, even when you're told you'll have to wait for an unnamed amount of time: Take a flash picture, get approached by the owner, chat with him, wish him luck on the new venture, and Viola! something will miraculously open up.
· 23 rings, no answer [Eater]
· Rao's Las Vegas [Caesars Palace official site]
· Rao's [Official Site]

More Inside after the jump... 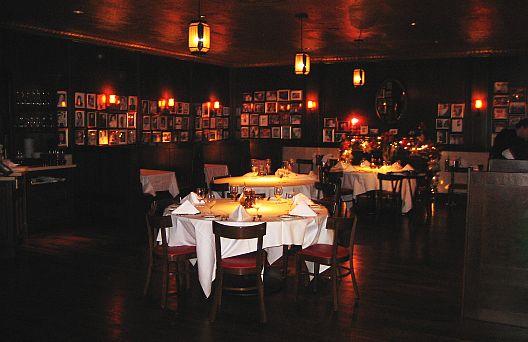 The space is a typically Vegasized version of the diminutive original. Instead of one room with 10 tables and a bar, there are two complete replicas of Rao's dining room on each side of a large central octagon-shaped bar. According to our new BFF, co-owner Ron Straci, everything in each room is placed and identical to the original, including the pictures of celebrities hanging on the walls. There is another large extra room with views of the Caesars pool and gardens, plus tables outside. The place to be is definitely the two "original" dining rooms; just to give it that authentic New York feel, those will probably be the tougher tables to get. Servers are cordial, if still getting their feet wet. (Tip: Keep that flash camera handy; everyone comes a runnin' when you're taking pictures.) Kitchen rolled out the best meatballs we've tasted since leaving the East Coast, a nice ricotta-spinach ravioli with sage and brown butter, and an excellent tiramisu. Eventually, they'll start serving at the bar, but not yet.