Share All sharing options for: Eater on Location: uWink on "Top Chef"

In a town that was built on, caters to, and runs on the hum of the Hollywood machine, we can't ignore the fact that even our restaurants make cameos on the big and little screens. Thus, Eater on Location, here to highlight what might be missed in that 2.5 second spot, but clogged the street for three days for filming. 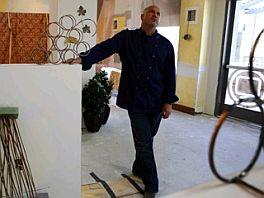 Now that Badabing Betty is no longer on "Top Chef," it's time to focus on the other local star of the show: Los Angeles. The show was filmed here last year, and as we've already seen, it's ripe with local restaurant and chef cameos. This week's episode landed the last six contestants at uWink in its Plywood stage, the interactive café in Woodland Hills, brainchild of Nolan Bushnell, founder of Atari." The supposed goal was to show the chefs how difficult it is to open a restaurant. According to host Tom Colicchio's blog, they failed, especially Mikey, who got the boot. Losanjealous spent a night at uWink back in November, which shows the finished product. In all good-natured spoiler fun, does anyone know where the final LA episode was filmed? Let us know if you do.