In typical LA fashion, this week's Plywood Report is all over the map, from Santa Monica to Pasadena to Westlake Village. But that's why you come here. Got a tip for us? Put the needle on the record and dance.

(1) Santa Monica: A reader sends word (and pictures) about a new bakery: "I was walking in Santa Monica yesterday when I noticed, under construction, a new bakery coming in called Vanilla Bake Shop at 512 Wilshire. The line on the sign said 'cupcakes, cakes, ice-box treats.' My feeling about Vanilla is great, just what we need, another retro cupcake store. Isn't that over yet??" [EaterWire Inbox]

(2) Santa Monica: Now that Tengu is open in the former Ivy at the Shore space, Abode, behind it, is up next. We know that the same designers, Franklin Studios, worked on both spaces, and that Abode has a high glamour, abstract 60's-esque design, rich earthy color palette, etc. We also hear that Dominique Crenn is the chef. But that's all. [EaterWire Inbox]

(3) Hollywood: Philippe Starck-designed Katsuya will plant itself at the SW corner of Hollywood and Vine in, what will become, residential loft and office space (the Broadway Hollywood Lofts). Target date: Summer, not the previously reported spring. [EaterWire Inbox; Chowhound]

(4) Eagle Rock: A reader dropped a note about "soul food joint," Larkin's. We heard it was open, but owner Mr. Joshua corrected us: "We are still working on the last bit of construction on our bathrooms, and at this point have no opening date. Very soon though." According to his mission statement, the place evokes a juke-joint vibe with locally made art, live music, and Southern food with a modern twist. It "recalls the height of the Harlem Renaissance and home cooking at mama them’s house." [EaterWire; The King of Eagle Rock] 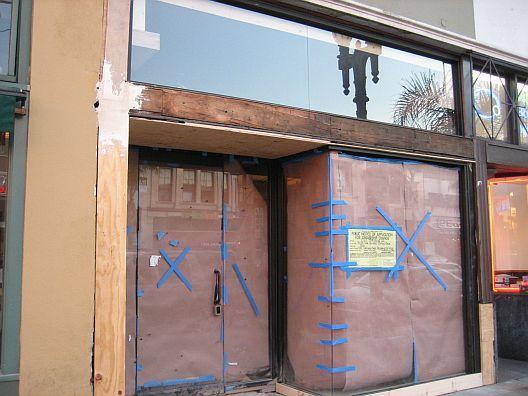 (5) Pasadena: We noticed construction in one of those spaces that can't seem to hold a restaurant for more than two years in Old Town. What was once the Rack Shack, then one or two sushi spots, is now papered up. The liquor license on the window says the name will be Tani, which we assume will be yet another sushi spot. Businesses next door don't know what's going in, and the workers doing construction in the rear no habla ingles. [EaterWire]

(6) Westlake Village: Those crazy Finefrock twins are at it again up north. The owners of P6 Lounge and Chapter 8 will next open Suki 7 (naturally), a stylish, Koi-esque restaurant and lounge. No word on the date yet. [EaterWire Inbox]