Thanks for indulging our Top Chef obsession today, but now on to business: This week's Plywood, a showcase of what's to come on the dining scene. Got one for us? We're all ears.

(1) Santa Monica: After a tasty dinner at the new Tengu last night (more to come), we noticed the papered Four Season cafe on the same block. Looks like Richies Famous Pizzeria will be the new tenant. We're not sure how "famous" Richie is because we're finding little about him, but we're sure the Santa Monica Pier tourists will lo-o-ove his pizza. [PLYWOOD]

(2) West Hollywood: Our favorite regular tipster writes in: "I passed Sanctuary on Sunset, ex-Joss site, with plywood barricade surrounding the front of it. Obviously a major remodel." We know Joss, located at the most western side of the Sunset Strip, closed in 2006; but we have no idea what Sanctuary is. Anyone? On a side note, we've considered Blowfish Sushi next door for Deathwatch, but we're feeling generous today. [PLYWOOD]

Studio City: From the Eater LA inbox: "The Vineyard Terrace across from the Bally's Gym and Marshalls centers has been sold and will be replaced by yet another sushi bar, just ONE block east of Sushi Nozawa. The number of sushi bars in sushi city is already over 25, and we get another one! When will a hamburger place open?" [PRE-PLYWOOD]

More Studio City: Seemingly there forever, we're told that Laszlo's Hortobagy Cuisine is in escrow and will become Lal Mirch Indian Restaurant. Bollywood Indian Restaurant is across the street. What's with all these Starbuck's-like antics in the Valley? [PLYWOOD] 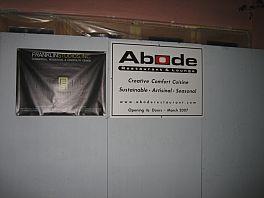 Plywood Replay: We're re-running this from last week because inquiring minds want to know more about Abode, which is currently under construction behind Tengu Santa Monica. We stopped by last night, and busy bees were getting busy inside, but it's boarded up so all we could get was a shot of the signage. We were tipped off that Dominique Crenn will be the chef, and we heard that maybe Sam Nazarian is involved, but that turned out to be a false lead. Anyone got the goods? [PLYWOOD]