As usual, Wolfgang Puck's AWFF was a doozy of a food event on Saturday. We tried to hit as many tables as possible vs., say, the more conservative Knife outing. We worked in tandem: One person waits in one line while the other waits in another line and/or gets wine for two. Generally a good strategy when there's more than 40 restaurants featured, plus wines, plus martini bars, plus a dessert lounge. But it also means filling up fast with a significant food coma soon to follow, and then regretting it for the next three days. Still, we traipsed around the cobblestone streets of Universal's backlot like two kids (Eater and FOE, Friend of Eater) in a candy store. 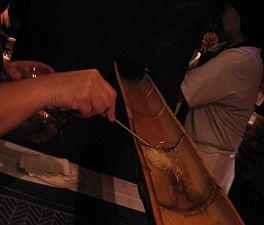 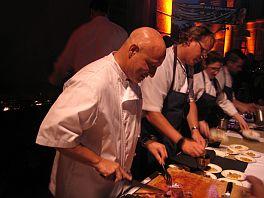 5) Long line worth dealing with: The Colicchio machine powered through their line at breakneck speed. Colicchio cheerful and extremely nice to Eater. Still wont' tell us who won Top Chef. "I can't tell anyone, but sure, I'm gong to tell you." Why, yes. Told someone he just flew in from Chicago. Chestnut risotto and flank steak much better than what we had at restaurant.

6) No Todd English at Olives to ask about Beso, but we're told "in a month and a half or so." At the table was Chef Katie, who we're told might be an opening chef of Beso. Fun fact: She won PBS' Top Chef-like Cooking Under Fire, hosted by English. Katie's rumored to be dating Tiffany, Season 1 runner up of Top Chef. Tiffany spotted in crowd on Saturday. Full circle.

9) Mark Peel says a few months for Peel (in former Oasis space). Much too much work to do on décor. Yes, we said, Oasis was very decorative. "Decorative is one way to describe it." 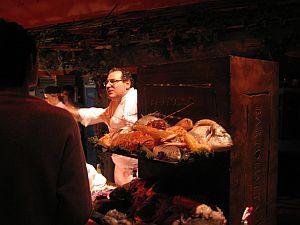 10) One of our fave Vegas restaurants, Bartolotta at the Wynn, makes strong impression with LA crowd. Fish "48 hours out of the Mediterranean" on display. Roasted seabass of some sort with anchovy dressing. Long line, totally worth the wait.

11) The night before, Paul Bartolotta and several Wynn chefs had table reservations at Les Deux but were turned away upon arrival. Doesn't matter how much money they have to spend, not enough girls with them. The chefs took their excess money to the Roosevelt Hotel, which was happy to serve them copious amounts of champagne around the pool.

12) Informal poll: Most popular restaurant for visiting chefs this weekend were the Mozzas 1 and 2, with Cut a close second.

Additional observations from Caroline on Crack