After filling up on all the sushi we could handle at Katsuya, we snuck off into the less crowded S Bar, SBE's adjacent new lounge. The two are connected in theory, but once S Bar opens (we hear next week, but they say it's "tentative"), you won't be able to swiftly move through the two. The entrance is on Hollywood. 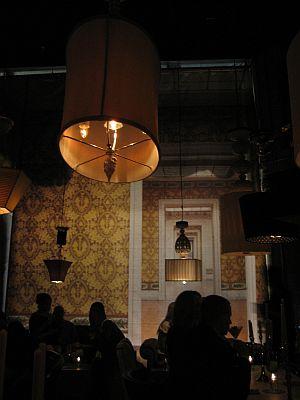 1) "Oooooooh...I love it" was pretty much the response from everyone who walked in.

2) Also designed by Starck, but completely different from the smeared lipstick-ultra modern Katsuya. T-shaped table in the middle of the room lined with candelabras. Funky mis-matched lamps strung from the ceiling, upside down. Floor-to-ceiling canvas on all four walls, even covering the windows, scenes from Versailles. An incredible effect. Couches, ottomans, very comfortable, very chic, very much the last time we'll probably be able to get in without fighting a line and/or paying off a door guy to get in and/or going extremely early and lingering too long. But doesn't mean we won't try.

3) Marissa (yes, our bloggy sister) said it was all very "looking glass." And that was without seeing scenes from Alice in Wonderland on the overhead plasma TV in the ladies room stall. 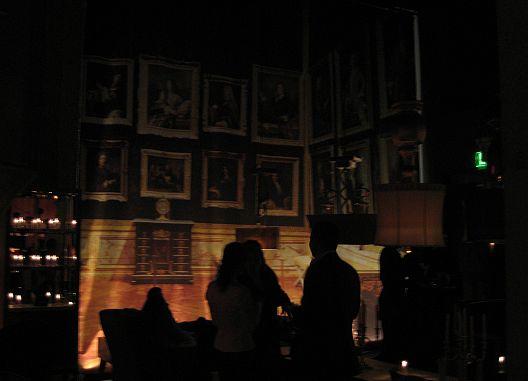 4) Small world syndrome: Turns out SBE's resident mixologist Ryan Magarian lives in Portland, OR and is good friends with a bartender we worked with when we lived in PDX in the early 00's. This crazy restaurant business... Magarian co-created a new boutique spirit, Aviation Gin, and S Bar and Katsuya are two of the firsts in LA to use it. We likey the gin, maybe a bit too much. Ahem. His cocktail concoctions sound crazy on paper, but are delicious going down. We'll try to return to taste the horseradish and pomegranate margarita (see point #2). 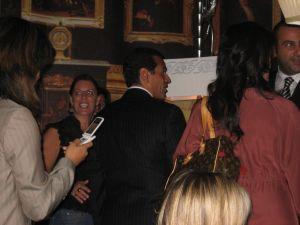 5) Mayor Antonio Villaraigosa can work any room with aplomb. He and Councilman Eric Garcetti are two peas in a pod. They left the party like two playas planning which club to hit next.

6) Rick Fox is very good looking and tall, but not as tall as we imagined. He's also very comfortable chatting up the hotties. Sam Nazarian is almost as tall as Fox, which was surprising. Brent Bolthouse and Danny Masterson are BFFs. We liked their show this week on Indie 103.1. Much to the dismay of our friends, no Heidi or Spencer to be seen. Isn't Bolthouse her boss?
· Hangover Observations: Katsuya Hollywood Opening [~ELA~]