The Food Dudes: From the Food Network to Fairfax

Share All sharing options for: The Food Dudes: From the Food Network to Fairfax

If there was any question why Jon Shook and Vinny Dotolo are called the "Food Dudes," just sit and talk with them for five minutes. The long hair, the unshaven faces, the tattoos, T-shirts, the constant use of the word dude: Jon, Vinny, and their offbeat team of chefs and prep cooks, are the very definition of 'dude'. We met up with the duo at the former T on Fairfax to talk about their new show Two Dudes Catering, which premieres tonight on the Food Network at 10:30pm. The show is just one project on their plate. A cookbook (tentatively titled "Cooking in One Pan With Jon and Vinny") will publish by the end of this year or the beginning of next; they're catering eight to 15 events a week, from 10-person sit-down dinners to parties for 300; and hopefully by spring '08, the still unnamed space on Fairfax---which serves as their catering facility for now---will open as their new casual, neighborhood restaurant. And that's all before either one turns 30.

When the two start talking together, it's like hanging out with a couple guys at a bar: Everything's all at once, it's excited, it's banter. There's a lot of, "Dude, check this out?" One starts riding the skateboard left on the floor by a prep cook. The other moves his clothes from the banquette: "Sorry, it was kind of my bed last night." It's what you'd expect. But then they start talking about their projects, the kind of food they love to eat and cook, the parties they plan, how much they put into their work, and these aren't just a couple of dudes anymore.

Shook, 26, and Dotolo, 28, met at culinary school in Fort Lauderdale almost 10 years ago. They've worked everywhere together since: The Strand in South Beach, The River House and The Wildflower in Vail, CO, and mentored by Govind Armstrong and Ben Ford at Chadwick here in LA. In 2004 they started Carmelized Productions, a very lucrative catering company. It's not surprising the Food Network took notice: They might not have the stature of Mario or Bobby Flay, they don't have restaurants that fans can visit, but when the two competed against Cat Cora on Iron Chef America, they only lost by a point. This from two scruffy-looking guys who, to most, look like they can't cook a grilled cheese. 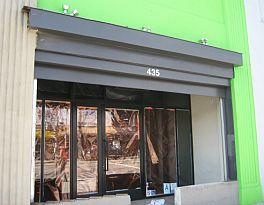 When it comes to food, both plan menus but Dotolo says he's more the creative side and Shook is more business (the latter had to skirt out of our interview to meet with the CPA). The focus is always seasonal, rustic, seafood, but not everyday food. Some dishes in their recent repertoire: fried petite Basque cheese with fig watercress salad; peanut butter bacon chocolate crunch bar; white corn polenta Bolognese with ricotta toast; open-faced braised rabbit sandwich, foie gras gravy and pancetta; fluke with tarragon grape vinaigrette. Their proposed restaurant will be much of the same. Dotolo says if we were to compare it to anything, "maybe Blue Ribbon in New York." They cite Daniel Boulud for inspiration; they love Jar and the Hungry Cat here in LA. "But we always go to Houston's," says Shook. "It's consistent."

Why do the show and why now? Exposure, natch, hair, tats and all. "Anyone our age would take this opportunity," Vinny says. "We know people will criticize how we look. We've already seen bloggers say we look 'dirty.' But what's a chef supposed to look like? Every kitchen I've ever worked in the cooks look like us." And 'at the end of the day' (a favorite phrase for both), it can only help business.

The five episodes of Two Dudes Catering follows the crew through the planning phases for the EXPN X Games or high-end Malibu beach parties: "It's not an educational cooking show, but more for entertainment," says Vinny. "People will see our approach to food, how laid-back our kitchen is. They stretch it out to show our personalities as much as possible, so you might see us argue over stupid things like how to cut onions, but hopefully it just shows what we do."

There won't be a big viewing party like the one they threw for their Iron Chef ep either. "Look, we're professional party throwers," says Shook. "We can't just call some friends over for beer." Dotolo agrees. "We can either spend $3,000 for a party for all our friends, or buy the stove we need for the restaurant. I'll take the stove."