We all know restaurants don't open when they say they will, thus, the Tracking Report. Got an update, know of something coming, see some Plywood? Let us know. 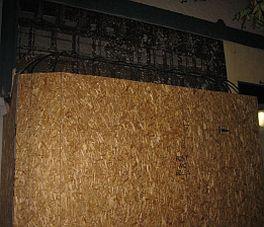 SANTA MONICA: We noticed significant Plywood added to the front of Bar PintXO, Joe Miller's new tapas spot on Santa Monica Boulevard, next to Boa Steakhouse. Boy how time flies: The original summer opening turned to early fall, now word on the street is that the restaurant is only about six weeks out. Sounds on time to us. We'll take a stab and say post-Thanksgiving, possibly early December. [Plywood]

BEVERLY HILLS: The final word on Jonathan Morr's new restaurant at the much-anticipated Thompson Beverly Hills: BondSt will open on November 5 when the hotel does. HotelChatter tracked down the news, we called and confirmed. [Post-Plywood]