Did a familiar face at dinner send you diving for IMDB? Send your findings---and all the fabulous details---to StarWatch Headquarters. 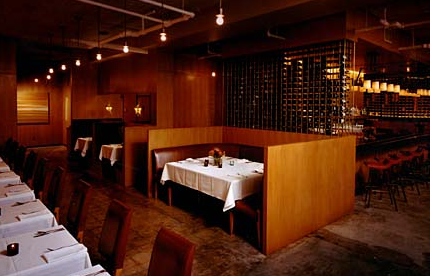 AMMO: On Tuesday none other than Brad Pitt strolled into the Hollywood restaurant for dinner, causing all sorts of pandemonium with the females on the wait staff who decided it would be a good time to primp. [StarWatch Inbox]

WHIST: While Geffen needed to head for the Hills, fellow Malibu refugee Mel Gibson sought comfort closer to home, in a Kobe burger at the Viceroy. [People]

IL SOLE: The fire-affected also dined in West Hollywood, where Tori Spelling and husband Dean McDermott ate while their B&B in Fallbrook was threatened by flames. [People]

LA POUBELLE: It was a funny night on the Franklin Strip last Friday: comedian Zach Galifianakis and The Office's Ed Helms and BJ Novak were spotted dining together. [Defamer]