A little late Wire for you before the weekend. Got some news, some goss, some questions? The door is always open. 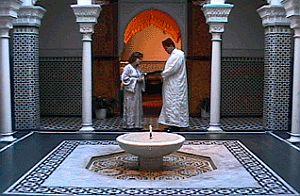 HOLLYWOOD: That little snippet from last week about Dar Maghreb being sold? We have two words for an answer: Jeffrey Best. Rumor has it that the co-owner of Beechwood, The Brig and the newly opened The Del in Playa del Rey has his sights on the Moroccan-themed spot. Chances are he's keeping the theme, just adding "his own swanky twist," as our tipster put it. [EaterWire Inbox]

CENTURY CITY: Aphrodisiac (10351 Santa Monica Blvd.) only opened last year, and yet not long ago we heard it was closing. The replacement is Kula, "a major player in Japan" says an owner. The menu is sushi and traditional Japanese dishes, seasonal and organic where it can be, and they are "committed to preparing dishes free of artificial additives, preservatives, colorings, sweeteners and seasonings." Shooting for a December 1 debut. [EaterWire]

SANTA MONICA: The Novel Cafe is readying its third location on Ocean Park in the same plaza as The Counter. No alcohol, just coffee, teas, breakfast and lunch, and other café fare. We can't remember if this one will be more like the book-nook one in Santa Monica, or the more stale version in Westwood, but do tell if you know. [EaterWire]

DOWNTOWN: Something called the 6ixth St. Bar & Grill will be opening soon at 601 S. Central Ave. We know nothing more about it. Perhaps one of the Downtown dwellers can weigh in? [EaterWire]