Share All sharing options for: Michel Richard Loves Ratatouille (the Movie and Dish)

At the Ratatouille DVD realease party last night at Social Hollywood/Boulevard 3, we happened to be in the buffet line where unconfirmed-but-probable new Social chef Michel Richard hammed it up for the cameras with a big pan of, what else, ratatouille. We asked Richard if he's back in LA for good, and he mumbled something that sounded like yes, but we're unsure. We asked if he was doing more with Social, and he turned and walked away. Perhaps he would've answered if we asked in French. (PS: No ratatouille was harmed during the making of that photo.) 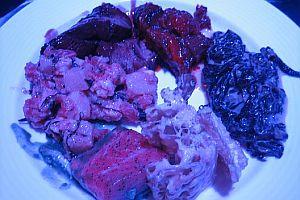 It's not fair to judge a chef for what he feeds a Hollywood DVD-release crowd, and that's a good thing. It's not that the food wasn't good last night (the ratatouille was tasty, but not the stuff that would make Anton Ego swoon), but it was more about the lighting: Blue light makes all food look like it was ripped from a 1965 Betty Crocker cookbook. The patio tables fared much better, where the fireside lighting and cheese and crepe tables made us as happy as Paris rats.
· Michel Richard Confirmation #3: Dispatch from D.C. [~ELA~]