Eater StarWatch: Double Grey'sSighting, Heidi and Seal at Sprinkles, Giuliani at the Pantry and MORE

Share All sharing options for: Eater StarWatch: Double Grey'sSighting, Heidi and Seal at Sprinkles, Giuliani at the Pantry and MORE

They eat cupcakes and froyo and sushi: See, celebs, they're just like us! It's like TV come to life, only without the commercials. See a star picking at her plate? Please, drop it here. 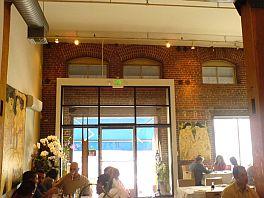 R23: The off-the-beaten path downtown sushi spot is graced with a Grey's sighting. From a tipster: "Katherine Heigl and T.R. Knight had dinner together on Saturday night (9/29). They ordered a lot of sushi. They looked really casual---Katherine in black shirt/pants set and TR in blue t-shirt and jeans---and laughed and talked for quite a while." [Eater StarWatch]

ORIGINAL PANTRY CAFE: Presidential candidate Rudy Giuliani made a stop at the downtown cafe to be endorsed by former LA mayor (and owner) Richard Riordan. [NYT]

SPRINKLES: Heidi Klum and Seal waited in line like normal people in Beverly Hills for some cupcake bliss. [Planet Gossip]

PINKBERRY: Michael Cera gets his at the one on Vermont. [Planet Gossip]

EIGHT-18: Dancing With the Stars (but 90210 in our hearts) Jennie Garth dined in costume with her husband Peter Facinelli in Toluca Lake. [People]