Share All sharing options for: Lunch at Cut: Three Take-Aways

We just attended a luncheon at Cut in Beverly Hills for the upcoming Cut in Las Vegas, set to open in the Venetian-adjacent Palazzo this January. Here, some news. 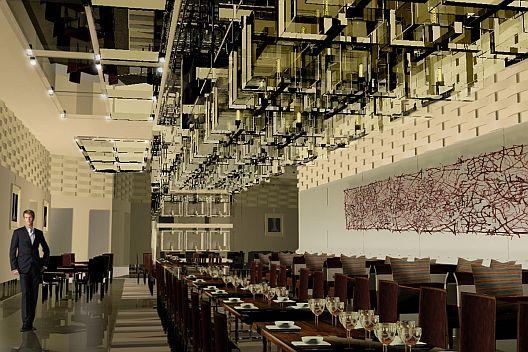 (1) Cut will be one of 14 restaurants (that we know of so far) in the Palazzo. It will be joined by: CarneVino by Mario Batali; Table 10 by Emeril Lagasse (concept still to be decided); Restaurant Charlie by Charlie Trotter; Dos Caminos; Grand Luxe Cafe; Jade; Lamborghini & Italian Cafe (next to the Lamborghini showroom); Mainland; the Grove's Morels French Steakhouse & Bistro; Prime Blue Grill; SushiSamba; Wildwood BBQ; and Woo. The chef at the Vegas Cut is Matthew Hurley, who's been with Puck and Co. for 12 years in Vegas. He's been here training with Lee Hefter for the last few months.

(2) Even Wolfgang thought last night's Michelin party had little to be desired. "It was so dark and too loud," he told us today. He asked if we knew who planned it, then gave us his thoughts on how it could've been better (Why did they have it there? Why didn't the chefs each bring some dish and have their staff serve it?). No wonder we didn't see him stick around too long.

(3) Even for a media luncheon, Cut runs on all cylinders. There was an army of staff, all prepared to answer any question, bring water, wine, set dishes down for the entire table simultaneously. Filet mignon, eight sauces, hand-cut fries, creamy polenta and braised brussel sprouts did everyone just fine.