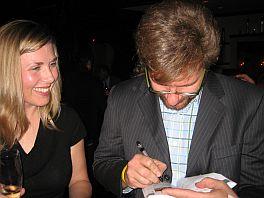 (2) Michael Cimarusti (Providence, one star), David Lefevre (Water Grill, one star), Josiah Citrin (Melisse, two stars), Joe Miller (Joe's, one star) were totally on. Autographs were signed. Photos taken. Surprised not to see Wolfgang Puck or Lee Hefter (Spago, two stars; Cut, one star) weren't around, but Wolfgang came from beyond the shadows for a couple photos and took off.

(3) Chefs supporting chefs: Josie LeBalch and Alain Giraud, spotted. Giraud says he wants the new brasserie to open before the end of the year, but according to some of our sources, that seems unlikely. As for the name: "You tell me!" he said, knowing about our contest. He wasn't impressed with the names we rattled off.

(4) No Michelin stars for the party food. We saw a few trays passed around the room, but always just two or three of something. Nothing made its way to us. Except the strawberries. The corseted servers were really pushing the strawberries. We had one. The most popular thing flying off the trays: The Michelin guides themselves. People were taking two or three copies each.

(5) Apparently Mozza was the only answer for sustenance. LeBalch and Josie GM David Osenbach were next to us at the cheese bar. Joe Miller and his former chef de cuisine were at the other bar. We heard Citrin and Cimarusti were over in the pizzeria. Where the starred chefs go.