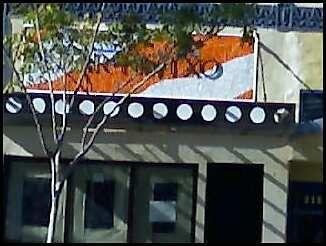 We hear Joe Miller's new tapas restaurant Bar PintXO will open on December 8, but don't we know better by now? Nothing opens when they say it will. Some things we know for sure: The chef and staff are hired (Rob Trester from Ocean & Vine will be working with Miller), stoves are on next week, the place is tiny, kitchen is right there, and there will be sidewalk seating. Hard to make out from that cellphone snap, but signage is up. Friends and family could start as early as 12/1, which means a 12/8 debut could work. Then again, it might not. Miller hoped to open in summer or early fall, the perfect time to sit outside on a little patio, feel the ocean breezes and sip a nice Rioja. The city of Santa Monica could care less about sipping Rioja with warm ocean breezes; thus, the delays. Here's a sneak peek at an early menu.
· This Just In: Joe Miller Opening Tapas Bar [~ELA~]
· Plywood Special Reprot: Joe Miller's Bar PintXO [~ELA~]