Share All sharing options for: Guy's: Restarting From Scratch 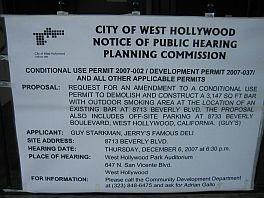 Found on the front of Guy's---the nightclub owned by Jerry's Famous Deli heir Guy Starkman, tucked between Dominick's and Jerry's Deli on Beverly Boulevard---was this public notice to "demolish and construct 3147-sq ft bar with an outdoor smoking area at the location of existing bar at 8713 Beverly Blvd."According to our nightlife guru, rumors of a remodel were thrown around a few years ago, but nothing happened. If we're reading our West Hollywood building commission documents correctly (fun!), Starkman wanted to put an outdoor patio in the back of the club but was denied last year. Tearing it down and rebuilding must be his work-around.