More Dish because it's restaurant opening season. See something debut in your neighborhood? We're all ears. 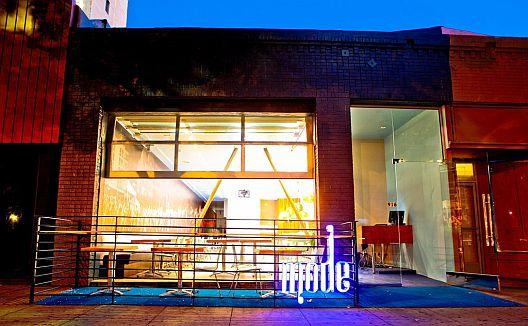 DOWNTOWN: Finally, after all the delays, Mode opened at 11am today. And according to owner Tony Jones, it will never close. 24/7 from here on out. Angelenic got a taste last night, but it didn't sound very representative of the Eric Ernest Frenchified menu in store. [916 S. Olive St., 213.627.4888]

CENTURY CITY: The replacement for Aphrodisiac, Kula, is in the midst of soft opening as we speak. Someone went to mock service and had a "very positive" experience, but keep in mind that they were wowed by organic soy sauce. Words like Frank Lloyd Wright and Tokyo's Imperial Hotel were used to describe the décor. Kula owners kept to their word on the opening date; let's see if they can hold to the no additives, sweeteners, etc. promise. [10351 Santa Monica Blvd., 310.282.8870]