Sorry for the Starwatch delay, but here's your weekly dose of who's eating where. See a celeb flip off another? Do let us know. 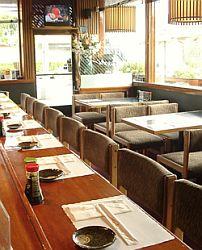 CAFE SUSHI: A regular Starwatcher writes about the Beverly Center-adjacent spot: "Unfortunately People Magazine got wind of this one first, but Nicole Richie and The Hills Lauren Conrad were dining together the other day. My friend is the manager and assured me that Nicole ate only cooked items, ha." [StarWatch Inbox]

COMME CA: It wouldn't be long before the celebs found it, now would it. Molly Sims and Justin Chatwin celebrating a friend's birthday at the new David Myers restaurant last week. Another day: Jeffrey Katzenberg checked out the brasserie. [StarWatch Inbox; Planet Gossip]

HUNGRY CAT: Another one: "Not a biggie, but I saw Nicholas D'Agosto (plays Claire's new boyfriend on Heroes) last Friday. [StarWatch Inbox]

MADEO: This is just ridiculous if true. George Clooney and Fabio threw down at the Beverly Hills eatery. Clooney flipped Fabio off, words were exchanged, a scuffle occurred. [Access Hollywood]

LITTLE DOOR: Have they tired of Il Sole? Courteney Cox and David Arquette were spied having dinner with six friends at the Third Street resto. [Planet Gossip]

THE LODGE: The Beverly Hills steakhouse was a draw for Sharon Stone, who ordered the veal chop with a glass of red wine. [Planet Gossip]