Because it's so close, because we love it as much as Britney, because everyone should go just once if not once a month, some Vegas restaurant news. Expect regular Vegas Dish every week from now on, so if you have a tip or experience to share, please do so here. Come on fitty-five! 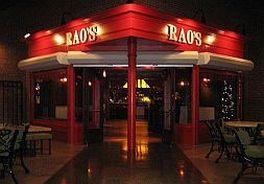 CAESARS: Has a year gone by already? Yes, yes it has. We were one of the first to visit Rao's last year, and here we are, celebrating it's first anniversary. On January 26, the restaurant has a special prix fixe, $150-a-pop menu with the added bonus of an autographed copy of the family cookbook. The baked clams, orichiette with sausage and broccoli, the meatballs, and even Uncle Vincent's "famous lemon chicken" will all be there. Think of it this way: You'll never get into the original in New York, might as well go to the one in Vegas. [EaterWire Inbox]

HARD ROCK: Because it's the thing to do these days, Ago will open in the former Simon space possibly by New Year's Eve (an official grand opening is scheduled for February). The location makes perfect sense: It's right across from Nobu, another Robert DeNiro backed venture. Agostino Sciandri's restaurant opened in West Hollywood in 1998 (also backed by the Weinstein brothers and Tony and Ridley Scott), and Eater NY is all a-twitter over the Ago that's set to debut in Tribeca early next year. Busy people. The room, we're told, will have an underground wine cave-inspired private room. Executive chef Sergio Santoro trained at Ago here in LA. [EaterWire Inbox]

LUXOR: Kerry Simon left the Hard Rock, but he's not leaving Vegas. First up is CatHouse, which opens on December 29. Tapas-style menu, but we have a feeling food won't be the first thing on anyone's mind. According to the Luxor website, "sexy performers" will model CatHouse lingerie while "performing choreographed vignettes." Not so much about the meatloaf or cotton candy here. Also at the Luxor, Pure Management opened Company American Bistro. The young Hollywood investors (Nicky Hilton, Wilmer Valderrama, Nick Lachey) get top billing over the "talented chefs brought in from some of the most famous restaurants in the world." [EaterWire Inbox]

THE PALMS: Next for Kerry Simon is Simon at Palms Place, which opens in George Maloof's new luxury condo-hotel tower in spring 2008. Designed by the ubiquitous Rockwell group, the 8,400-square-foot space overlooks a new pool and garden. Kerry's menu will be "sushi, steaks, seafood." With all this Simon swapping, we think Simon LA will continue at the Sofitel on Beverly Blvd., but that's really yet to be seen. [EaterWire]