While FOX is busy chasing down Hell's Kitchen 3 spoilers and threatening teenagers with million-dollar lawsuits, there's no better time to offer up a few more tidbits. Just don't tell anyone. 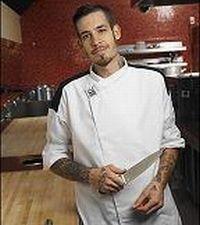 We hear that Tatou executive chef and Hell's Kitchen: Season 1 winner Michael Wray will figure prominently in one of the final episodes of HK3. Word leaked that camera crews were in Tatou, the sloooowly opening restaurant and nightclub downtown, filming Michael "at work," probably for a where-is-he-now segment. Rumor also has it that he's been in Vegas this week as a guest judge for the show. Why is the show just now touting its Season 1 winner? This is the third season of Hell's Kitchen, It would make more sense to feature the winner from Season 2. Last year when we contacted FOX to feature Wray in a where-is-he-now article, they wanted nothing to do with him. Now that he's at a splashy new job, sure, now it's all Michael, Michael, Michael.

Remember that the HK1 chef contestants were wooed by the promise of their own "million dollar restaurant" after getting humiliated by Ramsay on national TV. But when Wray walked through the door of fate, he ended up with a big check and some snazzy kitchen equipment. When we interviewed him (we found him anyway, Fox!), he admitted that the old switcheroo happened toward the end: "We were told we'd win a restaurant, and it wasn't until after that he offered to go with him [Ramsay] to London." Wray turned down London (the reasons are many) and got the consolation prize.

It was a similar situation for HK2 winner Heather West, who vied for the prize of executive chef at the Red Rock Hotel and Casino. After winning, she was instead offered the job of senior chef, which is a step below sous chef (we think) but far removed from "executive chef," at the Terra Rossa Italian restaurant. Here she's incredibly humbled by it all and appreciates the prize; as far as we know, she's still there (we were at the Red Rock last month). An insider told us that FOX promoted the whole thing incorrectly, but it made the show sound so important. More bullying tactics?

So we have Wray in Vegas, and West in Vegas. We assume that means the prize and final episodes are once again in Vegas. Let's hope FOX keeps to their promises this year. Hell's Kitchen 3 airs this spring, not in the summer as previous seasons. If you can't wait until then to see local boy Wray in action, catch him next week when Tatou finally opens for lunch.
· Tatou: Ink almost dried [Eater LA]
· The Ink's Still Drying on Tatou [Eater LA]
· Tatou Supper Club Gets Second Life Downtown [Eater LA]