Share All sharing options for: EaterWire: Izaka-Ya Not Katysu-Ya, Ketchup Still Coming, Views from the Penthouse

A little EaterWire to chew on before a three-day weekend...those of you who get one, anyway.

(1) We have more confirmation on the Katsuya-type restaurant spotted on 3rd Street: "My close friend works at Katsuya in Brentwood and she told me today that Katsuya announced that he's set up a place called IZAKA-YA on 3rd across the street from Sushi Roku. It's supposedly a cheaper option to his high-priced Katsuya restaurant." [EaterWire Inbox]

(2) Anxiously awaiting the Dolce Group's bottle of Ketchup to open, a rumor hit our inbox that the restaurant was ready, had some test-run dinners, all systems go, but then had licensing issues and hit more delays. The unconfirmed rumor continues, "They had to let the whole staff go for now." [EaterWire Inbox] 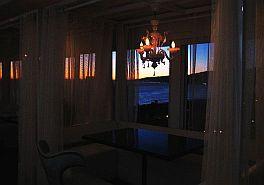 (3) We knew the Penthouse would be an aphrodisiac on Valentine's Day, but we had no idea that even the bathroom could woo: "I took my girlfriend to The Penthouse in Santa Monica for Valentines Day. It kicked ass. Incredible views of the ocean from the bathroom. The decor is really chill and the food might even be better than that view I mentioned." Shill probability: Low. From the bathroom?? [EaterWire Inbox]