Plywood Special Edition: Hollywood Gets Charcoal Next Month, Goa on the Horizon

Share All sharing options for: Plywood Special Edition: Hollywood Gets Charcoal Next Month, Goa on the Horizon

We heard directly from one of the owners that Charcoal at the Arclight is "one month out," which we think means late-March, early-April. Michael Sutton, who co-owns the restaurant with Adulfo Suaya (the two also own The Lodge together), 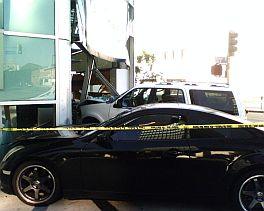 said that the restaurant will open for lunch, dinner and late-night (at least until midnight). "The concept is Americana, mesquite grilled comfort food. Hamburgers, ribs, chicken, salads." It was supposed to open last year, and the "coming soon" sign has been up for many months. However, this little December incident quite possibly added to the delays. If Charcoal does open in a month or so, Eater LA was spot on with the prediction.

Goa, the next Sutton-Suaya project, will open this summer ("three months") on Cahuegna. The group partnered with Ted Fujita, owner/sushi chef from Yu & Mi in Beverly Hills, and it will have a Japanese menu with an Indian motif. According to Sutton, it's very loungey with DJs etc. "One-stop dining and club."

If you think that's a lot to do in the next few months, he tells us, "These three will be followed by three more in Hollywood in the next two years." Talk about owning a neighborhood...
· Plywood Report: Charcoal in Hollywood... [Eater LA]
· Mega Plywood 2007 Edition: The Trendsters [Eater LA]