(1): Miss Irene one-stars film producer Gale Anne Hurd's Vertical Wine Bistro this week, unimpressed with a menu full of typos, overly sweet everything, and staffers without a clue. She dares to ask: What's a wine bar without a wine-friendly menu and, more importantly, a sommelier?

"Matching food and wine, though, is more an art than a science, and the idea that any one dish is the perfect mate for any one wine is absurd. Not to mention that the potential number of combinations/matches is dizzying?And if instead of coming in somewhere between a wine bar and a restaurant, Vertical concentrated more on the wine bar aspect, it could be more than an evening's stopgap — it could be a real destination."

Her review easily makes a case for why some entertainment industry people should just keep their wallets in their pants, their wines in their cellars, and let the private chef cook for their friends. Unless it's the "Today" show anchors, then let 'em have it. [LAT]

(2): The new ice cream-and-treat haven MILK on Beverly Blvd. has captured the taste buds of several people this week. Oishiieats raves, A Passion For Food thinks the milkshakes are too thin, Erin's Kitchen says it's just right, and Mike & Maria notice a few kinks still. For what it's worth, Eater LA thinks the service needs to get comfortable, the 25-cent ice cream bon bons were just OK (too icy, not creamy), and the cookies looked like something we'd find at a grade-school bake sale, but the chocolate madeleines were tasty. 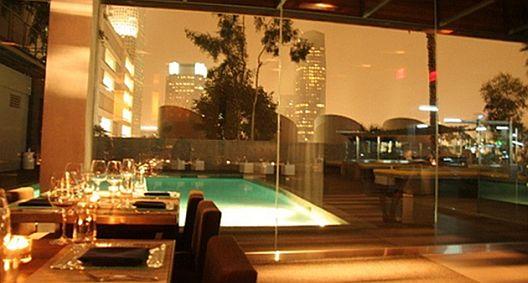 (3) Jonathan Gold appreciates Blue Velvet this week as much for the views of the downtown skyline or the quirky sunken communal table topped with giant marshmallow-like lamp shades in the lounge, but first and foremost because chef Kris Morningstar left crab cakes off the menu, unlike every other new resto-lounge in the area. [LA Weekly]

Elsewhere: The Knife slices a couple snapshot reviews of Circa 55 at the Beverly Hilton and J Restaurant & Lounge downtown; Jonathan Gold seeks out Saigon Flavor; LA.com goes for the The Village Idiot; deciding on the new-old Du-Par's at the Farmers Market; Nook isn't short for "nookie"; and a teenager gives in to Mozza peer-pressure.