Share All sharing options for: Eater's Journal: The Village Idiot

This is Eater's Journal, in which we muse on recent meals. We dine out a lot, so we might as well discuss. 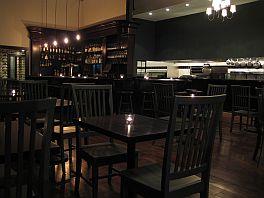 The Village Idiot: When we heard that Tobey Maguire called to get a table for four at this Melrose newcomer, and was told that no, even Spider Man can't reserve one, it made us want to check it out more than ever. The Idiot is less English pub than English-via-New York pub; there's a nod to the British, but it's more a neighborhood place for decent comfort food, nothing upscale, just right. It's probably great for after-work beer drinking, or sitting at the bar on a Saturday afternoon, when you'd probably get to know the owners, the bartenders, the servers. It just has that kind of vibe. We, however, decided to visit on a Saturday night.

The owners are really pushing the locals' angle by keeping it no ressies; they want neighbors and friends to be able to drop in anytime. But some people have real issues with no reservation policies in this town: Father's Office is either tolerated or hated, strategies are need for Orris on Sawtelle. Getting a table at The Idiot isn't as difficult as you'd imagine: If you don't want to wait a half hour to an hour, don't go on a weekend night. It's that simple. We got there around 8pm, ordered a couple cocktails, and only waited about 20 minutes for a table. By 9pm, the place was packed, three or four deep at the bar, and because the bar is in the middle of the room, that four-deep gets a little tight for table dwellers—lots of asses, hips and hoo-has at eye level. If you're really lucky, you'll get one of the window booths, which are very comfortable, perched high above the room so you can see all the action.

The crowd is a good mix, not too young, not too trendy, and makes for decent people watching. Because the ceilings are high in the room, with brick walls and wood floors, there's no sound absorption. But we could still hear each other talk and occasionally hear what's playing on the stereo. At one point, we caught one of the grooviest songs of all time, Bill Withers' "Lovely Day," and there's absolutely nothing wrong with that.

Kitchen's still greasing the wheels. Time lapsed a bit between courses, but everything was pretty tasty. Shrimp "fritters" are kind of like spicy pancakes with big pieces of tender shrimp pillowed inside. Steamed mussels: excellent. The fish and chips: not-too-greasy, nice and crisp, hand-cut fries. Ribeye cooked just as requested, with a potato gratin on the side. Beer and wine list isn't limited, just focused. Cider, Guineess, Boddingtons, Pasadena's Craftsman.

The Idiot is still a work in progress. When it first opened, no valet meant parking gripes from the first wave of diners; now there's a stand on Martel. People complained about the no host/no res thing; now someone stands at the door with a clipboard on the busiest nights. The owners seem like good people, the staff seem to like working there. They're doing a great job so far, and it can only get better. If we lived in the 'hood, we'd be regulars.
· Eater Inside: The Village Idiot [Eater LA]
· Village Idiot [Yelp]