Just a little Dish happening today, notable openings around town. Got something cookin' in the 'hood? Fire away. 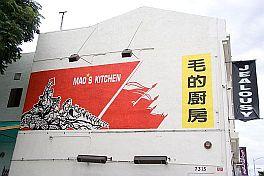 (1):A few weeks ago, everyone wanted to know about the big Mao's Kitchen mural that popped up on Melrose. We found out it was an outpost of Mao's in Venice and was supposed to open in January; then a cryptic message from the plumber made it sound like it wouldn't open on time. But voila: Mao's, behind the former Tommy Tang's place. Similar to it's brotha in food, price, scope. Locals are screeching in delight. [Chowhound]

(2) More sugar!!! Newly opened Big Sugar Bakeshop in Studio City has piqued some interest. According to the website, two young gals venture out on their own to create a neighborhood bakeshop they'd actually "like to stop in, not just work in." They bake everything from scratch—muffins, cupcakes, pies, cakes, brownies, cookies, candies—and they have lots of pretty pictures on their website. And you know these gals are young, and pretty savvy, too: They have a blog for the shop. [La.foodblogging]

(3): There's something about a teppanyaki (a la Benhihana) restaurant in the Farmers Market that we like. We're not sure why that is, but it makes us happy. Kado, located above the Bath & Body Works, is up and running serving conveyor-belt sushi, food cooked in front of you on teppan grills, and an outdoor patio. Early reports say, "Mmmm. [Chowhound]