The Yogurt Wars Part I: Red Mango Opens in May

Share All sharing options for: The Yogurt Wars Part I: Red Mango Opens in May

The frozen yogurt that started it all is finally coming to LA. Korean-import Red Mango opens in Westwood Village this May, with three more stores close on its heels. But unlike Kiwiberry, Cactusberry, Berri Good, Fiore, and we're sure many others, Red Mango isn't just another frozen yogurt shop riding the coattails of Pinkberry's success. Many believe it's where the Pinkberry entrepreneurs got the idea.

According to Dan Kim, president of Red Mango USA's operations, the yogurt shop first opened in Seoul in 2003, at least two years before Pinkberry opened its flagship store in West Hollywood. Now Red Mango has more than 130 stores in South Korea; Westwood will be its first in the U.S. We're not the first to notice, but the similarities between the two companies are uncanny: Both serve healthful versions of tangy frozen yogurt with everything from fresh fruit and crunchy cereals for toppings; both use a similar color palette in their stores; both have circular, red-hued logos with a red-hued first name and fruit-flavored surname; and both are Korean-owned.

Is Red Mango taking advantage of Pinkberry's success even if the idea originated with Red Mango? Or was it just plain brilliant to let Pinkberry "test market" the new treat? We chatted with Kim about the company's expansion plans, including dealing with Pinkberry and other froyo spawn of the world.

On Frozen Yogurt: Yogurt must maintain a certain amount of live and active cultures to be considered yogurt; here it's regulated by the CDFA (CA Department of Food and Agriculture). Kim says: "Our yogurt is all natural, made by licensed yogurt manufacturers, the best we can find in the California dairy business." It's basically made the way yogurt is made, but Red Mango will add proprietary natural flavors and it will be frozen. If froyo is made any other way (powders, etc.), it's frozen dessert, not froyo, yo.

On Copycats: Red Mango first served "all-natural" yogurt in plain and green tea flavors with fresh fruit and other fun toppings in 2003. Two years later, Pinkberry opened its WeHo store with a similar product in terms of yogurt flavor and fun colorful toppings. Although Pinkberry has spawned a number of imitators, Kim says Red Mango's major imposter right now is California Roll & Sushi (in Westwood) which claims to be serving authentic Red Mango yogurt. He says the company is "taking legal action" against the shop. 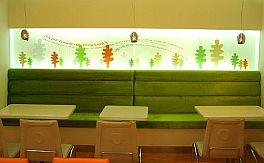 On Aesthetics: The original Korean Red Mango stores have an Asian-pop design with lots of kiwi green, plastic and acrylic seating, writing on glass walls. But for the US stores, Kim says they're going with "more of a coffee house/lounge/spa environment." The company that designed Coffee Bean & Tea Leaf took on the Red Mango project, so expect lots of woods and relaxed, comfortable seating. Think of it this way: If Pinkberry is The Hills, Red Mango will be more like Friends.

On Expansion: Although Red Mango had 100 stores within a few years in Korea, the U.S. expansion will be slow and steady. The goal is to have only 10 stores by the end of the year: Five LA stores, a few in San Diego, and possibly some near Seattle. The first will be located at 10942 Weyburn Ave. in Westwood; the second at 10401 Venice Blvd. near Culver City; the third at 10913 Pico Blvd. in West LA.

NEXT: The Yogurt Wars Part II: Red Mango vs. Pinkberry, A Study in Pictures