Welcome to this week's Report of Ply. See something transforming into something else in your 'hood? Let us in on it.

MID-CITY WEST—The former Em Bistro and blink-of-an-eye Solare on Beverly Boulevard (about a two blocks from Jar) is being completely torn apart right now...literally. Moving in: Jian, a Japanese and Korean bbq spot opening by summer. We have minimal details after talking to the designer as he watched workmen jack-hammer the floor yesterday: The entire space will be redesigned, incorporating what became Corky's Jazz Lounge and the main dining room together; lots of wood in the décor; every table will have a grill and air ducts will be in the floor instead of overhead, hopefully to make it as smoke-free as possible. Sad, though; we loved those light fixtures and that archway. This is the first restaurant in the States for the parent company. [PLYWOOD]

SANTA MONICA—While reader Mike was standing outside Le Sanctuaire in Santa Monica awaiting its noon opening, he met "two guys that looked like French ex pat pros." One, a “Charles the Baker” and the other, Cyril, formerly of Bastide, L’Orangerie, etc. says he’s chef de cuisine at Abode, which "will be opening in a month or two." Please recall that Abode is tucked behind the new Tengu Santa Monica and will feature an organic menu in a mod 60s-esque decor. We assume this means the March opening has been pushed back. UPDATE: Anastasia, one of the owners just wrote in to say "First week of April" for an open date. "Crunch time!" [PLYWOOD] 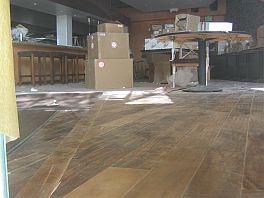 CULVER CITY—Bree at Triplecreme snapped some Plywood pics of Fraiche, Jason Travi's new spot which was supposed to open around Christmas...then January...now just soon. Still no answer at the restaurant's listed number. [PLYWOOD]

WEST HOLLYWOOD—A tipster sends word that a new Le Pain Quotidien is opening at 320 S. Robertson Boulevard: "Now if they would only replace more of those Hilton/Lohan-attracting stores with restaurants..." Odd because another Le Pain is only .87 miles away on Melrose, next to Urth Caffe. [PLYWOOD]

DOWNTOWN—A tipster found this: According the Farm of Beverly Hills' website, the restaurant will open a fourth outpost downtown sometime in 2008. Do they still have the "best brownies in town?" [PRE-PLYWOOD]