We promise not to end the week on a dark note, but we couldn't resist one little Deathwatch before St. Patrick's Day frivolity commences. We'll have happy four-leaf-clover news a bit later.

Oh, O-Bar. This WeHo spot had a thing going when it opened in 2004. One of the first designed by Thomas Schoos, it was sexy and splashy. Opening chef Joseph Antonishek (now at MINX) created whimsical food that sat well with many early critics. But then something happened, and we're not sure exactly what. The room sat idle. Special nights were created to lure customers back. Half-off wine and food on Mondays. Dessert-only menus nightly. Free drinks every hour on Thursdays. But now, now, we think this is final grasp/gasp before finally giving up: 10% off all food on Tuesday nights before 8pm. Couple that with a tip from someone who swears they heard the owner slip that "Maybe it's time to sell." Estimated time of death: Eight weeks. 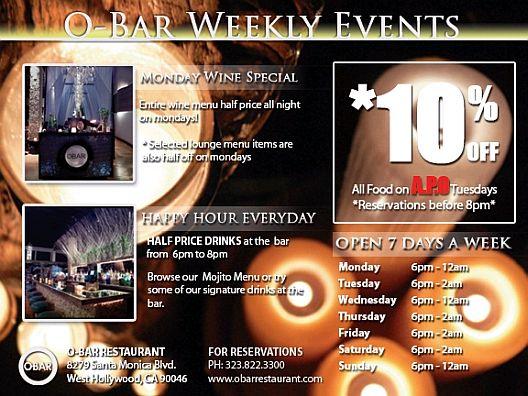