We received two separate emails about Sopra, the Italian restaurant that opened above a few antique stores on Beverly Boulevard in November. Yes, November of last year, as in four months ago. The restaurant got high marks from a some of LA's more notable critics, including Angeleno and the LA Times. But it's in a notoriously doomed location, and few can figure out how to make a restaurant work there. For this Deathwatch, we have a play in three acts.

Now it's Sopra, before that was La Di Da, before that was Cyrano and before that was Pane Caldo- a less than impressive list. Mozza has proven that just because a space has a reputation as a restaurant graveyard, it doesn't mean that it's cursed forever. Do the antique stores downstairs scare away restaurateurs? Is the kitchen too small to properly handle a room of its size? Is the owner of the building difficult? Why can't anyone get it right?

(2) Another reader makes reference to a Chowhound post that says Sopra is already closed and will become an Indian restaurant. He asks, "Any truth to this? I think this place is awesome, and have no idea why it can't find a crowd."

(3) We called the restaurant and a (now alarmed) employee said that as far as she knew, Sopra is still in business, with several private parties on the horizon. Too bad we know more than she does (never a good sign): A public notice shows that Sopra's owners are selling the business lock, stock and barrel, including the liquor license and all the furniture and fixtures...everything. We suspect a transition will happen any week now. 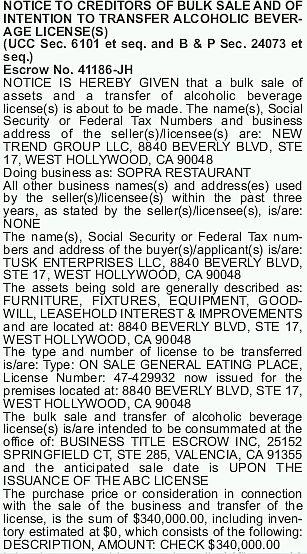 From the Jan. 4-11 issue of Beverly Hills Weekly