Eater StarWatcher Premiere: Who's at Mozza, McDreamy at Campanile, Jude at Magnolia, and MORE!

Share All sharing options for: Eater StarWatcher Premiere: Who's at Mozza, McDreamy at Campanile, Jude at Magnolia, and MORE!

Celebrities need to eat---even if they pretend to---and we like watching them. You can throw a chopstick in any direction and practically hit one, but it's hard to keep track where they're all going. There's more to life than Mr. Chow and the Ivy, right? Thus, we bring you the new Eater StarWatch, a weekly look at who's noshing where. See a starlet stuff her face? The tip lines are officially open. 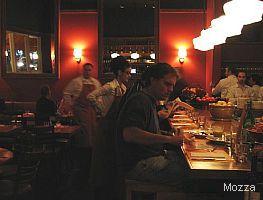 MOZZA: A tipster sent word that Mario Batali himself was in the pizza shop recently, schmoozing with Jill Hennessey who picked up a stack of pizzas to go. That same week, Mario was seen holding court with Jimmy Kimmel and Sarah Silverman, latish, after Kimmel's show. In another sitting a Hound spied Giada DeLaurentis there (we imagine making those orgasmic faces she makes when eating something she deems delicious), and Gilmore Girls' Lauren Graham. [Eater LA; Chowhound]

IL GRANO: Harrison Ford and Calista Flockhart were spotted with child in tow at this West LA Italian fave. "Perhaps it was Calista's adopted son? Either way, he looked hot despite his old man droopy ass." [Defamer]

GLADSTONE'S: The crashing waves, the blue sky, the oceanside setting is perfect for a breakfast with...grandma. Leonardo DiCaprio and his grandmother were spotted here recently. [People]

MATSUHISA: Recently Famke Jenson plus one requested the sushi bar, but settled for a table inside when presented with 30 minute wait to be ring side. [EaterWire] 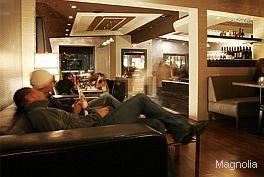 MAGNOLIA: Someone spotted Jude Law here for lunch, and the same day Fall Out Boy's Pete Wentz was in for dinner. [E! Online]

GOLDEN GOPHER: On March 2, Drew Barrymore was seen "sucking face with a scrawny-looking guy" who the spy found out was Spike Jonze. Lots of giggling, lots of smooching, and dancing to Patsy Cline ensued. [Defamer]

FRED 62: Kirsten "Kiki" Dunst was "rockin' some serious fuck off sunglasses" in Los Feliz. She was waiting for someone, but amused herself with a dog tied up at the next table. [Defamer]

JOHN O'GROATS: Last Saturday, Chris Klein and Ginnifer Goodwin were once again spied at breakfast. "They must go there every Saturday, so if you're a fan, that's the place to be." [Defamer]

RED PEARL KITCHEN: The "Tao knock-off" staff seems to know Danny Bonaduce well. He had his kid with him. [Defamer]

CRUSTACEAN: Still surprises us that anyone goes here, but Whitney Houston seems to like it. [Perez Hilton]