Let's go with a big ol' scoop of the StarWatch for dessert, shall we? Every Thursday we unmask celebrities for the eaters they really are, put 'em in a bowl, and top it off with a bright red cherry. See a starlet stuff her face...or pretend to? Let's hear it. 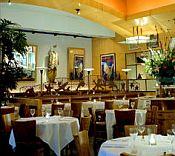 CHAYA VENICE: The political melting pot of LA---in one evening, evil incarnate Ann Coulter was spotted in a belly-bearing shirt eating seaweed salad with a dinner date. Later that night, the Penns, that would be Sean, wife Robin, and kids, stopped in for a very quiet late dinner. If they came face to face, who would fling the sushi rice first? [StarWatch Inbox]

CORA'S COFFEE SHOP: One day it was Alcove in Los Feliz, next day, Adrian Grenier was sittin' suave at this Santa Monica café. Now that his show is getting good buzz, boy's gotta make the rounds. [StarWatch Inbox[

THE NOSH: Grenier's Entourage co-star gets out, too. Kevin Connolly (Eric on the show) was at this Beverly Hills deli on Sunday. "So short he could barely see over the counter?" [Defamer]

FIGARO BISTROT: Lounging outside on the Los Feliz resto's patio was Kiefer Sutherland and some guy friends. "Something awful was happening with his face, was it a laser peel? Just bad skin? Scary!" [Defamer]

SWINGERS: Not hiding her skimpy outfit in the wee hours at the 24-hour Beverly Boulevard diner, Bai Ling who got a little impatient with the slow service staff. [Defamer]