Share All sharing options for: Eater in Vegas: Batali's B&B Ristorante and David Burke Open, Bon Appetit Weekend in May

Every now and then we'll dish from Las Vegas because it's so close, we Angelenos go fairly often, and there's plenty of good eating---and gossip---to keep tabs on. Not everything that happens in Vegas has to stay there, you know. Got a tip? Roll it here.

(1) BataliWatch '07 isn't restricted to LA, you know: Now he's taking over Sin City. Seems fitting, doesn't it? The big man and Joe Bastianich just opened B&B Ristorante near the Blue Man Group Theater in the Venetian earlier this month, and will soon open Enoteca San Marco in the Grand Canal Shoppes (it was supposed to be April, but as far as we know, that's not happening.) One of our new Vegas friends sent word that B&B looks like a mini Del Posto, and is "actually quite intimate and comfortable by celebrity-chef knock-off standards." The menu is classic Batali, lamb's toungue, brains, and all. (See for yourself). Some Southwest Hounds made it sound a little uneven in the early opening days. But these guys are pros; we hope B and B wouldn't put their name on it if it's not worth it. Our Vegas FOE (friend of Eater) wonders if quality will remain high once the owners leave the premises, or if the menu will be tempered "once the fannypackers start lining up." [EaterWire] 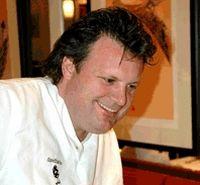 (2) Another newcomer via NYC is David Burke in the Venetian, which opened near B&B about a week earlier. Burke is a gregarious character, known for David Burke& Donatella, David Burke @ Bloomingdale's, David Burke's Primehouse in Chicago—you get the idea. David Burke likes us to know the restaurant is his. Official verbage about this outpost says "Both the restaurant's bold décor and amazing menu will reflect Burke's acclaimed flair for presentation. Menu items include crisp & angry lobster cocktail, Daivd Burke's (!) cheesecake lollipop tree, and pretzel-crusted crab cakes." Our FOE says that after two visits, it was "overwrought, tasteless, dated stuff." But again, a new restaurant needs to find its footing. And here's an interesting LA connection: The executive chef is Troy N. Thompson, former chef of Jer-ne at the Ritz-Carlton in Marina del Rey. [EaterWire]

(3) In case you need another reason to head to LV---no, not for the crazy pool parties gearing up for spring---Bon Appetit is throwing a weekend-long, multi-resort shindig with some of the cities top chefs on May 17-20. Special lunches, dinners, and cocktail hours with the editors and chefs at restaurants (most of our personal favorites) like Bartolotta Ristorante di Mare at the Wynn, Daniel Boulud, Rao's at Caesars, Bradley Ogden, Mesa Grill, Guy Savoy, Sensi, Michael Mina, and many others. There's also a special grand tasting at Caesar's, and a lakeside dinner and John Legend concert at Lake Las Vegas. Get all the deets here. [EaterWire]