Share All sharing options for: First Night at Fraiche Restaurant

We had a little look-see at Fraiche in Culver City last night, it's debut. This new venture from chef Jason Travi and Thierry Perez sits right on Culver Boulevard, near the corner of Main Street; actually, just a few doors away from BottleRock, where both briefly worked. The dining room is wide-open with big, big windows and patio out front. An open kitchen takes up half the room, with a full brigade of chefs at the ready, all in crisp whites with bright red bandanas on their heads. We weren't the only eager ones: The place was almost full by 8pm. 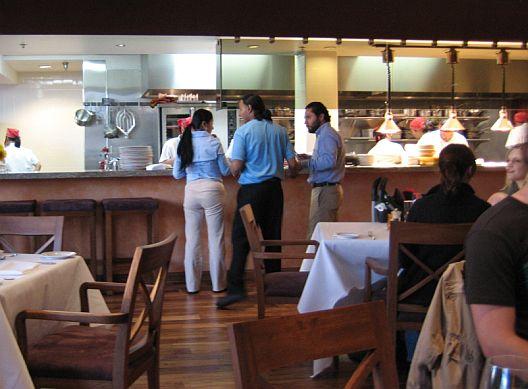 We noticed more Italian than French on the one-page menu, some salads (wild mushrooms with endive and frisee was good), a few light seafood dishes, rich lamb stew with ricotta dumplings, tasty-sounding pastas. Entrees around the $20-$25 mark, pastas around $15-$20. Nice wine list, reasonably priced, interesting selection. Service working out the kinks, but lots of extra staff on hand to help. All in all, very promising (though we have to say, we're not fans of the light blue oxford/tan chino uniforms; too corporate).

To really see how a restaurant works, go the night it opens and just... watch. Subtle maneuvers make all the difference: a manager nods to the host to stop seating so everyone can catch up; a new cook reads notes and confers with another; the lights dim when they should; the sheer focus of the exec chef and his sous, working circles around everyone else. These are the makings of a well-oiled machine. And here, in a few weeks, it will be.
· Breaking: Fraiche Opens Thursday [~ELA~]