For you, another heaping helping of the StarWatch, where we unmask celebrities for the eaters they really are. This week: Britney likes fried shrimp, ya'll. See a starlet stuff her face...or pretend to? We know you wanna? let's hear it.

IL RISTORANTE DI GIORGIO BALDI: We're so glad our first visit to this famed SM eatery didn't disappoint in the celeb factor: We watched a graying Ben Stiller and his wife get mauled by producer/agent type at the door on his way out last Saturday night. And they were eating peacefully just moments before? [StarWatch] 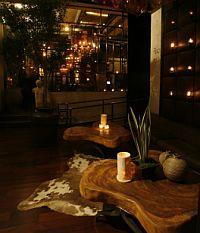 CITIZEN SMITH: You can practically throw an onion ring in any direction and hit Britney Spears these days, but she was spotted with mom and sis Jamie-Lynn at this Hollywood spot. At least they haven't disowned her, yet. She was also snapped at Ruth's Chris in Bev Hills last night. [Planet Gossip; People]

SWEET LADY JANE: Doesn't matter what anyone else thinks, when La Lohan's sweet tooth kicks in, she heads to this bakery of 'tude. [People]

MR. CHOW: It's not even interesting anymore, but Nicole Richie and Joel Madden were snapped leaving the Beverly Hills celeb haunt. Again. [People]

BOB'S BIG BOY: Madden's ex Hilary Duff and a bunch of loud girls were seen stumbling around the Burbank diner at 12:30am on Tuesday. They made sure everyone noticed. [Defamer]

ALCOVE: He lives in the neighborhood, so it's not unusual to see Scientologist/actor Giovanni Ribisi hanging out at this breakfast spot. "Very pleasant and adorable. No dark vultures circling overhead. No voice of Satan." [Defamer]

THE GRIDDLE CAFE: Now that he's back on TV, and actually looking kinda hot, former 90210er Ian Ziering was spotted at 8am the other morning. "He was with an older man I assume was his lover/provider, and was eating something healthy-ish, despite the pancakey temptations all around him." [Defamer]

YU-N-MI SUSHI: The currently brunetted Amy Smart was at this Bev Hills spot last Thursday. Her and her friend were waiting on a bench to be seated. Yes, sometimes celebs have to wait, although she's not super big time yet, so she may have been taken for just another struggling actress who kinda looks like your next door neighbor or that girl in the Tide commercial you saw last night. [Defamer]