We dine out more times than we can afford---especially in Vegas---so we might as well dish about it. Therefore, the Eater's Journal. Enjoy.

Mario Batali and Joe Bastianich opened B&B Ristorante at the Venetian last month, and there's been little to no press, and only minimal Hound chatter. We assume this is the way they like it. Unlike the Guy Savoys and Bobby Flays of the world, there are no giant pictures of Batali anywhere in the resort. No flags the size of Tao's out front. You'd think there would be good foot traffic because it's next to the Blue Man Group theater, but it's in a corner behind the theater, kind of hidden when you walk down the hallway. Before the show, people might investigate; but when we walked upstream the hordes of post-show fans, not one person turned around to see what was back there.

In a place like Vegas, there's something really wonderful about that. It's not showy, but rather cozy, seats only 100 or so. Two dining areas flank a small bar. Dark woods, tile floors, mirrors, comfy banquettes. Rock and roll blaring from the speakers. Only reading about Babbo, we assume this is what it's most similar to (some Chowhounders wholeheartedly agree, others think it's more like Del Posto). 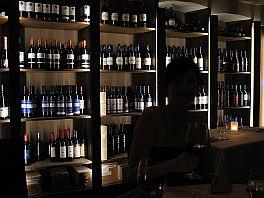 We were late. We found our friends in a semi-private room surrounded by shelves of wine bottles. Without skipping a beat, the server poured us a glass of something red. He was a bit brusque in demeanor, and his wife was dining at our table (which we didn't learn until later), but all in all, everything arrived on time. While the group started in on branzino and duck with sweet and sour cabbage, we landed with some strechetti (loose twist pasta) with baby lamb ragu and plump spring peas. Delicious, but if we took more time to look over the menu, we would've ordered something else. The mint love letters, the cauliflower sformato with sweet shrimp; you know, Batali dishes. We'll go back.

With so many Italian restaurants in Vegas, some better than others, why go to B&B? The draw is that it's Batali's place, has that Batali vibe, the Batali menu. But is that enough, even in the land of celebrity chefs? The rooms weren't full the entire time we were there. Some staffers told us it's been quiet, but picking up on the weekends. Vegas is about to head into the slow summer season. If B&B never packs with tourists, it could stay an intimate sanctuary for those in the know. How many people eat lamb's brains anyway?
· B&B Ristorante at the Venetian [Official site]
· Eater in Vegas: Batali's B&B Ristorante and David Burke Open [~ELA~]