SANTA MONICA: Our Montana operative writes from the tony nabe today: "I just walked by the Montana Lounge and noticed a change of ownership notice in the window. According to the sign, the new owners, as rumored, are Hillstone's Cafe R&D." Just as Caroline on Crack suspected. What we don't know is why SBE even bothered to open the lounge after letting the former Yu Restaurant space sit idle for so long. Calls were placed. Stay tuned. [EaterWire Inbox] 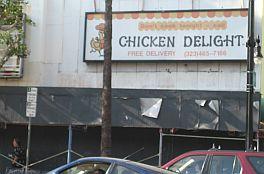 HOLLYWOOD: We heard a rumor---actually it's on the ABC license---that Adolfo Suaya is the proud new owner of Chicken Delight on Hollywood Blvd., just east of Ivar. Not sure what's going in the space. We happened by yesterday and snapped the fencing. [EaterWire Inbox]

HOLLYWOOD: Also on Hollywood Boulevard, near the same intersection, we saw a change of ownership notice on Star Shoes, which we think is still open. The bar's phone message insinuates it's still in operation. Name of new bar moving in: Chill. [EaterWire]