Post-Plywood: Charcoal Lights Up Next Week

Share All sharing options for: Post-Plywood: Charcoal Lights Up Next Week

HOLLYWOOD: A reader working near the Arclight has been keeping tabs on Michael Sutton and Adolfo Suaya's new restaurant, Charcoal, on the corner of Ivar and Hollywood. Today's update: "I talked to a guy in there today and he said they were opening next week, but wouldn't give me a date. The seating capacity says 130 according to the sign on the wall." Eater was in the neighborhood yesterday, the door was open, and here's what we saw: Lots of wood, in the floors, on the walls; stacks of firewood used as decoration; leather booths; nice big bar; antler chandeliers. We didn't spot a menu, but Sutton previously told us that "the concept is Americana, mesquite grilled comfort food. Hamburgers, ribs, chicken, salads." Keep your eyes---and noses---peeled.
· Almost Ready to Ignite: Charcoal [~ELA~]
· Plywood Special Edition: Hollywood Gets Charcoal, Goa [~ELA~]
· Plywood Report: Charcoal in Hollywood... [~ELA~] 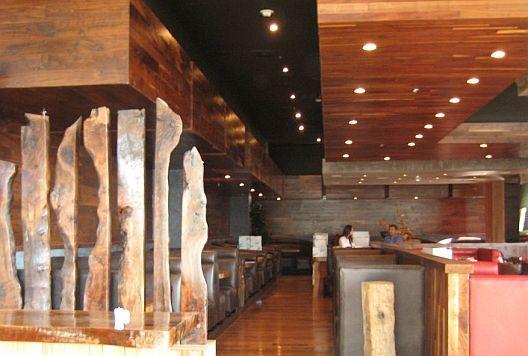