Wandering the streets of Hollywood this week, we noticed one thing most of those streets had in common: PLYWOOD. Here's our report from the splintery landscape. 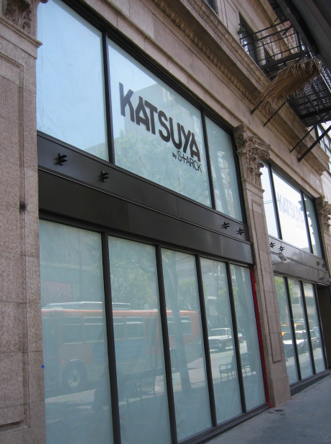 1) Hollywood & Vine: The scaffolding recently fell away from around the Kor Group's Broadway Hollywood Lofts, giving us our first unobstructed view of the signage, at least, for SBE's next Katsuya, already a Plywood vet. If the lettering on the windows is a true indication of the restaurant's footprint, this is gonna be one giant raw fish emporium--it looks like it's taking up the entire ground floor. [POST-PLYWOOD]

2) Cahuenga: The Cahuenga Corridor is wall-to-wall wood. We knew the large Art Deco beauty on the west side was destined to be Goa, but it seems as if the Sutton-Suaya duo will stop at nothing for total Cahuenga domination! Across the street from Goa (in stylish black plywood) will be Kitchen 24, a 24-hour diner with full bar, opening late summer. And on that side of the street, next to The Room, is the relocating-from-Las Palmas Bar DeLuxe, which will now be a(nother) swanky whiskey lounge. [PLYWOOD]

3) Sunset & Vine: We also have location reports on two of the new spots by Bowery owner George Abou-Daoud. Delancey and Mission will both be on Sunset, near Bowery. Those and all of the establishments we just mentioned in the Cahuenga entry are being designed by Spacecraft's Kristofer Keith, the busiest man in Hollywood. [PLYWOOD]

4) Hollywood Blvd: That precious little French place that shares a courtyard with Memphis and La Cantina, Brasserie Les Voyous, is no longer precious nor French. Signs went up saying the place was closed for remodeling but they've since been replaced with a change of ownership naming one lucky Peonese Melograno as the new owner. We have no idea if that's a person or a place. Or a tasty Portuguese dish. [PLYWOOD]