Eater StarWatch: Entourage at Caffe Primo, Desperate Housewives at Edison, Everyone at Cut, and MORE

Share All sharing options for: Eater StarWatch: Entourage at Caffe Primo, Desperate Housewives at Edison, Everyone at Cut, and MORE

Since we ran off for mai tais early yesterday, we didn't get up the StarWatch. Sigh. We know you can't do without a dose before the weekend, so here you go. Let's unmask celebrities for the eaters they really are, shall we? See a starlet stuff her face...or pretend to...you know what to do. 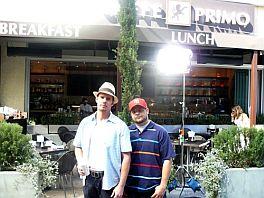 CAFFE PRIMO: The Entourage boys took over the café and gelateria at the Sunset Millennium complex yesterday morning. Kevin Dillon and Jerry Ferrara, looking rather uncaffeinated, posed for a pic. [EaterWire Inbox]

SOR TINO: The happy family, Calista Flockhart, Harrison Ford and the Calista's kid were with friends (and another tot) in Brentwood. "She looked thin, but not like her old overexercising and undereating days." [Awful Truth]

CUT: We don't know if it was all in one night, but Tom Cruise and Katie Holmes, Gwyneth Paltrow and Courtney Love, Tara Reid, Ian Ziering and Prince having dinner separately at Wolfgang Puck's the Cut in Beverly Hills were all spotted at Puck's Beverly Hills steakhouse. [Planet Gossip]

DOMINICK'S: A tipster had simultaneous, "not exactly top caliber" sightings on the patio: "First Whitney Port from The Hills was with a group of friends. They were sort of loud, but she was calm and quiet. They ate mostly cheese and charcuterie and drank red wine. They did not skip dessert. Later in the evening, Michelle Rodriguez with some guy. They had a late, quiet dinner on the side of the patio." [EaterWire Inbox] 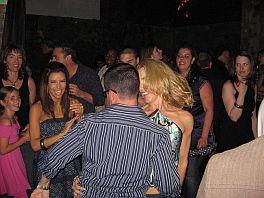 EDISON: We saw Eva Longoria on Jimmy Kimmel last night talking about the Desperate Housewives wrap party. Only we would wonder, "Where?" Then this picture of Felicity Huffman dancing with Longoria watching shows up in our inbox. Longoria didn't even change her dress from the Kimmel show. [EaterWire Inbox]

THE BOWERY: From Scrubs, Sarah Chalke was spotted on a double date in the Hollywood bar. [Defamer]

VILLAGE IDIOT: An Eater starwatcher saw Katherine Moennig of the L word (she plays shane) last night looking very much like her character and her character's inspiration (Sally Hershberger)---ripped jeans, T-shirt, disheveled hair. Dining with a female friend at a corner table. They were there early and left early. "FYI, she's also gwyneth paltrow's cousin, I believe (too lazy to look up IMBD trivia)." [EaterWire Inbox]

POLO LOUNGE: Not unusual to see celebs running around the Beverly Hills Hotel, but on 4/28, Pam Anderson was there with the girls and a guy. Celebrity for no reason Brandon Davis was also spotted. "Really, he seemed aimless and an utter waste of protoplasm. [Defamer]

AROMA CAFE: On 4/27, Joaquin Phoenix and girlfriend were spotted acting all lovey dovey in Studio City. "At one point the lady had gone somewhere and he was sitting alone with a cigarette hanging out of his mouth, very Walk The Line. I got a thrill." [Defamer]

THE PENTHOUSE: Last week after we reported Luke Wilson hanging out at the restaurant in the Huntley Hotel, a reader sends word that he was there just that day. We hear that he's always there lately, and likes the cabanas in the lounge. [EaterWire Inbox]