As much as it pains us to keep repeating that name, Harry Morton's hipster Mexican chain is slated to open June 16 at the Century City mall. Some of you may only know Morton for dating Lindsay Lohan, but his family is behind the Morton steakhouse chain and the Hard Rock Cafes. Franchising is in his blood. The first Pink Taco opened in Vegas, but it was the second location in Scottsdale that caused some problems: Locals rallied against the restaurant because they deemed the name too obscene. According to the Arizona Republic, the tumultuous year made the young Morton stronger. He wants to have more than 100 restaurants worldwide, they're branding a liquor, and he's tweaking the menu and hiring people to help run the company. Sounds like he's finally getting a handle on the business, but then he says something like this:

The building will be pink and more risque in the decor, he said. "It's going to be a little rawer. It's a little funkier. We really focused on staying true to the East LA vibe."

Huh? What exactly does Harry Morton know about East LA, and why does he think that's a selling point for westsiders going for gentrified Mexican food in a mall, in a city known for its authentic Mexican food? Anyway...renderings above and below. Nice looking patio overlooking Santa Monica Boulevard, fun decor. We've eaten at the one in Vegas. OK food. It will probably be packed. 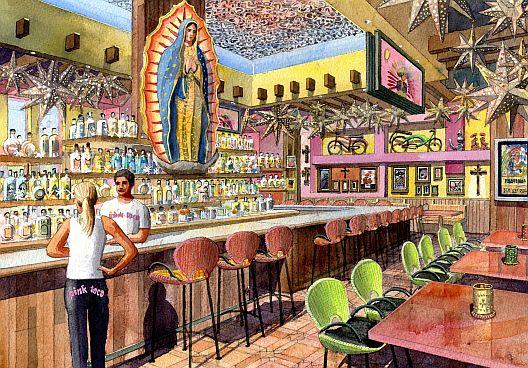