Time to jump off the food/chef/cooking show bandwagon (until next week, that is) and get back to business. First up, a mini Shutter, news on what's closed/closing around town. Know something we don't? Let's hear it. 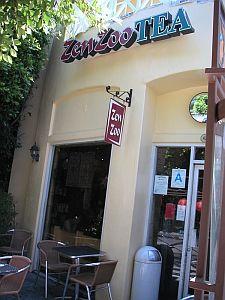 BRENTWOOD: A concerned Westside reader sends a note about the rash of empty spaces popping up in the strip mall at 13050 Vincente Blvd., near the Country Mart:

"There have been a few recent closings in Brentwood, in the small commercial strip of San Vicente east of 26th Street. Boba tea emporium Zen Zoo shut its doors two weeks ago, and the former Italian restaurant Pane Fresco a few doors away is also empty. The stand in the Country Mart near that sold drinks and ice cream is abandoned too. Wonder if anyone knows if anything is planned for these locations?"

We called the Zen Zoo headquarters and were told that they lost their lease on the Brentwood location, which opened in 1998. Co-owner Alfred Ritter said that they are looking to reopen a spot nearby, but until then, the Hollywood and Beverly Hills locations are still open. Pane Fresco sits in the same strip mall, which also holds the still-open Nagao. What gives? We're a little unfamiliar with that corner, so if anyone knows anything about that little plaza, we're all ears.