While some Eaters are getting all liquored up in Aspen, we'll wallow in a heaping helping of Starwatch. No one's leaving until the plate is clean. Spot a star or starlet dining out recently? Let us know. 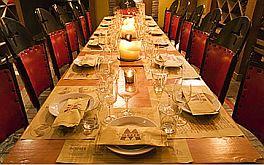 MOZZA: It's like the pizzeria was just discovered or something. Expect weekly sightings from here on out. Last week, all the tabloids/gossip sites had the item that Gwyneth Paltrow and Chris Martin had dinner in the private dining room, joined by Drew Barrymore, Spike Jonze, Courtney Love, Robert Downey Jr., and Kate Bosworth. On the same night, Hilary Swank was in the "regular" dining room, and Ryan Seacrest was spotted that same day at lunch with a "blonde Hollywood-type woman." [People, Defamer]

BAY CITIES DELI: The home of the Godmother sandwich has a notorious driveway, and most people know---or at least look to see---that it's one way (going in off of Lincoln Blvd.). But not Tara Reid, who went out the in in her white Porsche convertible. [Defamer]

LES DEUX: Isn't it ironic that Prince shared bottles of p.i.n.k. vodka with fans at the celeb hangout? No p.u.r.p.l.e. vodka? In case you were wondering, as we were, Jehova's Witnesses are allowed to drink alcohol, but don't condone drunkenness. And he was at Les Deux? [Planet Gossip]

JOAN'S ON THIRD: Musician and constant performer John Legend (seriously, he plays so many events!), was spotted enjoying a roast beef sandwich at the soon-to-expand café. [Planet Gossip]

KINGS ROAD CAFÉ: On Sunday (6/10) funny guy Jamie Kennedy parked right in front of the never-empty café "looking all hung-over," and had lunch with a buddy. [Defamer]

KATSUYA: Now that Vanessa Minnillo's knife partner is in rehab, she was back with her boyfriend Nick Lachey having sushi in Brentwood. [Planet Gossip]