So much EaterWire, so little time. We tried splitting it all up today, with the Westside (and a little Hollywood-ish thrown in) below. And we'll have more Eastside news on Monday. Until then, let us know what's goin' down in your hood. 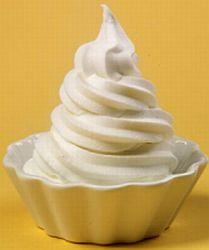 WESTWOOD: Red Mango is "the official dessert" of the LA Film Festival, which starts this weekend. Why do you care? Because next Saturday, June 30, at the corner of Broxton and Weyburn in Westwood, you can get yourself some free Red Mango. What's Red Mango? Oh, there's a little info here, here, and here. [EaterWire Inbox]

BRENTWOOD: A reader asked what was going in the now shuttered Zen Zoo Tea and Pane Fresco spots in the Brentwood strip mall near the Country Mart, and more than one person responded: Le Pain Quotidien is moving in. From one: "Trade your nebulous boba balls and commercialized feng shui for $12 open faced sandwiches that are actually worth the price." The second part of the inquiry was about an empty space in the Country Mart. Officials told us it will be Taqueria Frida from the owners of Frida in Beverly Hills, and it's still a couple months out. [EaterWire Inbox]

SANTA MONICA: The 5x5 Chef's Collaborative dinners continue, with the next one slated for Mélisse on July 29. Josiah Citrin will host, with Michael Cimarusti, Christophe Eme, David Lefevre and Angelo Auriana helping out. We're told there are only 10 tables left between 9 and 9:15pm. Call 310.395.0881 to snag one.

SANTA MONICA: Wine and cheese shops are almost as ubiquitous as frozen yogurt these days. Montrose-based Goudas and Vines just put in paperwork for licenses at 2000 Main St., former home of Pioneer Boulangerie. We stopped in the Montrose location once, and it's a charming fit for that Foothill village. Santa Monica? We'll see. [EaterWire Inbox]

SANTA MONICA: Our Montana Ave. operative writes in today: "On my way to get lunch today, I noticed that a place called Grateful Bread is coming to 1518 Montana. The space has been empty for a long long time. At one point, it was the quite good (and very French) Madeleine's Cafe & Bakery, followed by Cafe Provence and finally by the stupidly-named Cafe Le Piew. As you might imagine, that one did not last long." Beside the eye-roll the name automatically inspires, a Google search turns up a Grateful Bread in Seattle (natch) and another in Sacramento. Not yet sure if it's all related. [EaterWire Inbox]

CENTURY CITY: A shilltastic reader sends an enthusiastic note about Ummba Bar and Grill near the AMC Theaters in the Westfield mall. The website says it's a counter-service churrascaria where you self-serve your sides, pick what kind of meats you want grilled, order wines or cocktails, and get the food "weighed" for the final bill. Ummba (oomba) opened in December, and it sounded busy when we called to check the info. [EaterWire Inbox]

MELROSE/HOLLYWOOD: Eric Greenspan's Foundry on Melrose now has live jazz in the afternoons. Per a reader: "I was across the street at Antonios last Sunday sitting next to the crotch-rocket riding stunt team from Pirates and Rush Hour 3. The people-watching on Melrose is still top in town, second only to the Venice boardwalk." [EaterWire Inbox]