Share All sharing options for: Eater Starwatch: Courteney Cox at One, Vince Vaughn at Seven Grand, Tom Hanks at Buffalo Club, and MORE 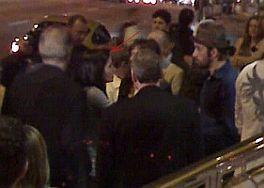 ONE SUNSET: Two days and they're already flocking: After ex-Friend Jennifer Aniston stopped in One for an event on Tuesday, Courteney Cox Arquette was spied last night. Gosh we just love cell phone pics. What, was Il Sole too busy? Another reader notes that Courteney was having a little get together with hubby David and friend Lisa Kudrow among others.[Starwatch Inbox]

CRUSTACEAN: We heard Avril Lavigne was hanging around with Latina-goddess Shakira a couple weeks ago, but bonding over roasted crab and garlic noodles? Who knew? The two were ushered up to the private bathroom upstairs because the line was too long at the "regular" one. [Starwatch Inbox]

SEVEN GRAND: The Cedd Moses-owned, taxidermy mecca is (for some reason) the kind of bar we'd expect to see Vince Vaughn. Maybe it's the whiskey. He was on the smoking patio looking "non-bloaty." Even bloaty we think he's hot. [Defamer]

LOLA'S: Rehabbed and recycled Britney Spears was tossing back a few recently. According to US Weekly, after two Jack and Cokes and an orange-flavoried martini, "she didn't seem drunk." Anyone else, on the other hand, would've been tanked. [Defamer]

KETCHUP: Paula Abdul's birthday bash turned into an American Idol reunion with Jordin Sparks, Blake Lewis, and Chris Sligh among the revelers. Is she pretending to be a kid with Kool-Aid cocktails, or luring the youngins with candy? Either way, there's just something wrong about it. [People]

CELADON: This was buried in our vacation-week emails. The uber-tan George Hamilton was spotted twice in one week. First time, drinks with friends, lingering for over three hours. Three days later, he was in with his son eating tuna tartare lollipops and sesame shrimp toast. The man's a fan of Lillet. Fitting. [Starwatch Inbox]