Gossip From Gourmet on Fire & Taste of the Nation: Little Dom's, Crudo, Loteria II and MORE

Share All sharing options for: Gossip From Gourmet on Fire & Taste of the Nation: Little Dom's, Crudo, Loteria II and MORE

Between Gourmet on Fire at the Loews Santa Monica hotel and SOS Taste of the Nation in Culver City, ours was a weekend full of food, booze and sun. The Gourmet magazine event was smaller than last year's, but the setting couldn't be more perfect for mojitos and grilled meat. The best part of Taste of the Nation is seeing which chefs walk around together and where they eat. Unfortunately, we were talking so much, we didn't get to all of the tables, but we were invited to the after-party at Ford's Filling Station, where off-duty chefs and staff ate and drank more. Basically, everyone just got shitty---when the Irish Car Bombs hit the bar, we knew it was time to go. Instead of reeling from full bellies and hangovers, we left with a bucket full of good gossip. We saved the juiciest tidbits for you, natch.

(1) Chef/caterer Akasha Richmond, owner of Akasha's Visionary Cuisine, is opening a restaurant in the former San Gennaro space, that big corner restaurant next to Ford's Filling Station in Culver City. Hopes to open in the fall. The chef also spilled that she was selected for that restaurant makeover show we helped spread the word about in February.

(2) Roaming chefs couldn’t get enough of Loteria Grill's tacos at Taste of the Nation. Everyone wanted to know when chef/owner Jimmy Shaw's new Hollywood location was opening, and where: In the former bookstore on Hollywood, next to Geisha House, by end of summer/early fall.

(3) We knew there was signage for Crudo Ristorante in the former Norman's space. What we didn't know is that the owner is Antonio Alessi, the man behind the defunct Alessi (now Mozza) among other places. Word is he's looking for the right people to head the place up. 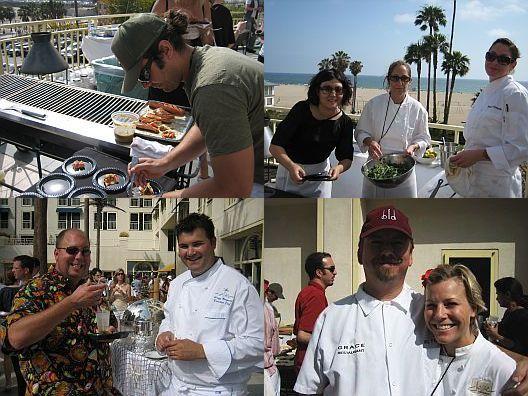 (4) At Gourmet on Fire on Saturday, we saw ex-Valentino chef Steve Samson working with David Myers at the Sona grill. Samson is quite the chef-about-town, filling in at various kitchens around town (like Sona). We think the two are cooking up something else---a new Italian something, perhaps? Neither will confirm, but they won't entirely deny, either.

(5) Also at GOF, Suzanne Tracht and the chef of her new restaurant Tracht's were working the grills. They're shooting for a July opening at the Renaissance Long Beach Hotel, possibly on the luckiest day: 7-7-07. Suzanne said that she hopes her new noodle shop (tentatively Tracht House) will open at 2000 Avenue of the Stars around this time next year.