As any good EaterWire should, we have a little Shutter, a little Dish, a little Plywood, and answers to some questions from last week. Got something to share? Hit us with it.

WEST HOLLYWOOD: They may have been hiring a few months ago, but we heard from GM Justin Wyborn that Nobu LA will open in October. By the looks of the construction site, that sounds about right. The Rockwell Group, designers of several other Nobu locations, is the design firm. [EaterWire Inbox]

CENTURY CITY: Harry Morton's first LA outpost of Pink Taco opens on Friday. Because of this, we see the humor in having Men Without Sex play the invite-only opening shindig on Thursday. [EaterWire]

BEL AIR: According to the LAT, Olivier Rousselle, former exec chef at Michael's and Camden House in Bev Hills, has taken over the restaurant at the Luxe Hotel on Sunset Blvd. The restaurant is now called On Sunset, not to be confused with ONE Sunset just down the way a bit. [LAT 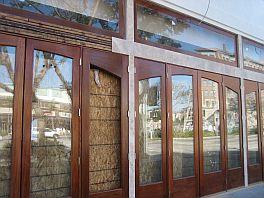 CULVER CITY: Someone asked about the spot next to Ugo, on the corner of Cardiff and Culver Blvd. A few people emailed to say it's going to be a gelato spot, owned by Ugo. True: We placed a call and found out that the adjoining location will serve 32 kinds of gelato, all made on the premises, and they hoped to open by the end of this month, but maybe early July. [EaterWire Inbox]

MONTROSE: The charming Bistro Verdu has closed. Per an email sent out by owner Michael Ruiz, the last dinner was served on Sunday 6/24. Ruiz says he's looking for a new, larger location to reopen, and in the meantime, he's opening retail/take-out shop one block north on Verdugo. Bistro Verdu was sold to Nadav Bashan, "an accomplished chef formerly of Providence and Michael's," who will open a neighborhood bistro soon. [EaterWire Inbox]

SOUTH PASADENA: The Firefly Bistro now has some blues to go with brunch on Sundays. Chefs Monique King and Paul Rosenbluh whip up green goddess omelets and French-toast-style tortillas, while Big B Brenner plays from 11am to 2pm. By the by, Monique and Paul weren't mentioned in that LAT article last week about couples in the kitchen; the two have been married and successful restaurant partners for years. [EaterWire Inbox]

ENCINO: A reader sends a note about Capriccio Italian Trattoria (not Il Capriccio Pizzeria): "The windows were lined with that brown paper that means 'we're closed or remodeling'. Calling the listed number said it had been changed. The new number was some guy saying that they were relocating, but wasn't sure where they were going." [EaterWire Inbox]

NEWPORT BEACH: We had one lone Orange County inquiry last week about Tutta Mare at Fashion Island. A reader responds: "The liquor license for Tutta Mare has been sold to something in Laguna Beach," which leads him to believe TM will be non-restaurant related. No more big splashy chains for you! [EaterWire Inbox]