LA Not One of Batali's Top 5 Food Cities, But Vegas Will Do

Share All sharing options for: LA Not One of Batali's Top 5 Food Cities, But Vegas Will Do

Well, we're back from an incredibly restful vacation and slowly dipping our toes back in the water. Guestblogger Alissa did a great job keeping up with the frenetic scene, but in case you missed it last week, let's rehash a little news from the big man himself, Mario Batali. When he's not dissing LA, he's actually quite likeable. 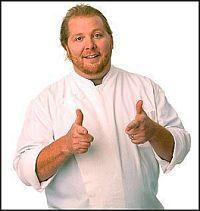 We may not be one of Mario Batali's top food cities (that would be New York, Portland/Seattle, New Orleans, Las Vegas, and Philadelphia), but he'll gladly take our money. In an interview with the LA Times' Moveable Buffet Vegas blog last week, the clog-clad chef again says that the only reason he decided to plop something down in LA is because Nancy Silverton is involved. Otherwise, poo on LA. To him, Las Vegas is more akin to New York because it has the round-the-clock hordes, not overly picky eaters who won't eat after 9pm. While the crowds never die down at Pizzeria Mozza (even past *gasp* 9pm!), he admits it's slow-going at his new Venetian ventures, B&B Ristorante and Enoteca San Marco, probably because there are "so many chefs" to compete against in Vegas. And he explains why his two restaurants are better then other Vegas Italian spots:

Well, the B&B one looks understated and not nearly as outrageously Guido as the rest of the Italian restaurants out there do.

After 19 Months Away, the Exchange Reopens in DTLA With a New Vision