This series will either reach a Roman numeral we won't know how to write, or the whole frozen yogurt hoopla will completely implode and all we'll have left is good old-fashioned ice cream again. Still, we continue? 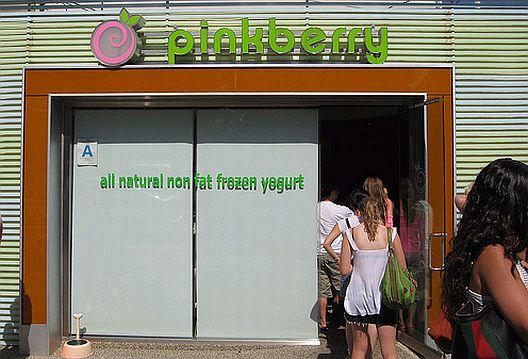 The Pinkberry that started it all. Photo from jleighb, Flickr

While problems that Pinkberry caused in its original West Hollywood location have somewhat subsided, the froyo company continues to stomp its way through the LA landscape. Our brothers over at Curbed report a new Pinkberry store opening on Montana Ave. in Santa Monica, the Pasadena store is still on the horizon, excitement grows for one in Westlake Village, and we're sure about 500 more are in the works. But it's the one in Little Tokyo, opening less than 50 feet away from foodie fave Cefiore, that's really contentious. According to the Downtown News, the owners of Cefiore (which opened as Fiore last year) were going to hold a grand reopening in May, but decided to wait until Pinkberry debuts in June so customers can taste the difference. Cefiore spokesman Tyler Barnett wants a "Pepsi-Coke challenge.":

"To demonstrate Céfiore's superiority to our rival, Pinkberry, we have no choice but to postpone the event until the first weekend of summer," emailed Tyler Barnett, a spokesman for the company. "For the sake of friendly competition, we must wait for their doors to open, to allow the customer to decide whose cuisine reigns supreme!"

"Céfiore is Pinkberry's only real competition," he asserted. "We feel we are the only ones who have the power to overtake them."

He's the only one who really thinks that, too. Soon Pinkberry won't be the only competition in the downtown area: Red Mango looked at retail space recently, and Kiwiberry and another Korean import, Yoguberry, is looking, too. OK. Now it's just getting ridiculous. Where's your originality people?
· Pinkberry Strife Quieting [Wehonews.com]
· Little Tokyo's Cold War [Downtown News]
· CurbedWire: Get Ready To Drink At Hotel Palomar [Curbed LA (2nd item)]
· Frozen Yogurt Wars Part VIII: Red Mango Readies for Battle Staffs Up [~ELA~]