Share All sharing options for: The Dish: Tanzore, The York, Bar Hayama, Tracht's

OF COURSE there's more than just Osteria and Craft this week. Here then is The Dish, a smattering of other recent debuts. Know of something that just opened in your neck of the woods? Let us know. 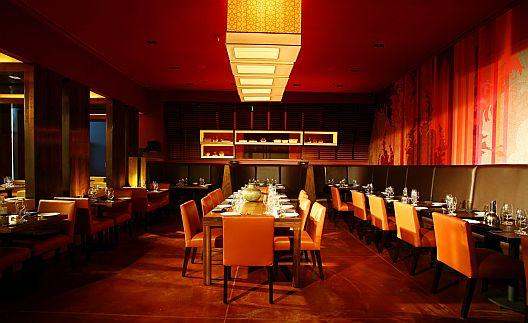 BEVERLY HILLS: The family behind the Gaylord Indian restaurant have finally opened Tanzore, which looks very sensual, rich colors, tapestries, hand-carved wood accents. We're not going to do it justice without repeating the press release verbatim, so we'll just leave it at that. But there's no better time to check it out than this month: For the next two weeks a "preview menu" will be discounted by 30%. So eat cheap now, see the space, go back with an expense account later. [50 N. La Cienega Blvd., 310.652.3838, www.tanzore.com]

HIGHLAND PARK: Two emails were dropped in our inbox about The York, which took over the Wild Hare and opene don 7/12. One tipster was in for friends and family previews and says: "It looks and acts like a true gastro pub...had the catfish which was great, they had already run out of the fish & chips. Looks like martinis will be under the $10 mark unlike the $12 3oz Ketel pour up the street at Marty's." Gabe Byer owns the spot with Ryan Ballinger, a couple of one-time bartenders at Edendale Grill. Check out the menu on the website. [5018 York Blvd., 323.255.9675]

WEST LA/SAWTELLE: The owner of Hama in Venice took over the original Sasabune location and opened Bar Hayama on Sawtelle. According to Sake 101, there's a firepit in the patio, frosted glass, and that it "has the personality of a Sushi Nozawa/Sasabune with Sugiura-san's bellowing and stern authoritative commands to his chefs, but the ambiance (and potential insanity) of Koi or Hama with attractive Japanese hostesses waiting to greet you at the door." [1803 Sawtelle Blvd., 310.235.2000, www.bar-hayama.com

LONG BEACH: JAR chef/owner Suzanne Tracht partnered with the Renaissance Long Beach and opened Tracht's on 7-7-07. Chef de cuisine Jessica Alexander is at the helm, cooking a similar menu to Jar's---think braised meats, steaks, roasts, chops. We'll only consider LBCers lucky if that butterscotch pudding is on the menu, too. [111 E. Ocean Blvd., 562.499.2533]