Share All sharing options for: Intelligentsia Coffee Debuts in August

Intelligentsia Coffee CEO Doug Zell has learned a lot about Los Angeles since deciding to open a coffeehouse in Silver Lake. Probably more than he ever wanted to know: Getting the permitting all squared away for Intelligentsia at Sunset Junction has been a tad trying, not unlike other restaurants/bakeries/bars, but the day will finally come. If all goes as planned, Zell hopes to open Intelligentsia on August 7, just in time for the Sunset Junction Street Festival. We stopped by the shop last week for a quick look around and saw beautiful blue and white Nicaraguan tile, procured from locally owned Granada Tile, white marble counters, exposed brick, and a fabulous patio tucked under the red-brick-colored archways where dry misters will keep things cool. The coffeehouse will be everything Starbucks isn't: Baked goods will come daily from Delilah Bakery and BreadBar, tasting coffee to find your favorite brew is encouraged, and counters are low and open for maximum exposure to the barista's magic and access to the "coffee sommelier." Zell calls it the "theatrical approach" to serving coffee. 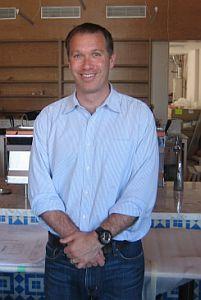 In order to create one of the city's---and they hope one of the world's---best coffeehouses, Zell (right) and director of special projects Kyle Glanville are bringing in some of the country's top baristas from Portland, Seattle, San Francisco. Yes, people apparently will move to serve coffee. But, as they explain, working at Intelligentsia is more like working in a wine shop where the staff gets rigorous training to help and educate the customer. Why so much? Intelligentsia finds and serves "seasonal coffees," which Zell explains, is like any agricultural product---the best coffee beans are harvested during certain times of year. Like strawberries: Sure you can get them year around, but everyone knows the best strawberries are found in the summer. Knowing the nuances is just what they do. Ask anyone from Chicago, and they'll tell you why Intelligentsia is the best. Ask anyone from the Eastside, and they'll tell you why they can't contain themselves with excitement. Now that the West Coast Intelligentsia roasting facility is up and running nearby, Zell says the SL coffeehouse will be a prototype for more shops in L.A. and beyond. But nothing will be cookie cutter, every location will be unique. Why L.A.? "The culinary scene is being relit in L.A, and it's just the right time."
· Intelligentsia Coffee: Silver Lake First, West Coast Domination Second [~ELA~]
· Intelligentsia Coffee: A Coffee That Screams Eastside [~ELA~]